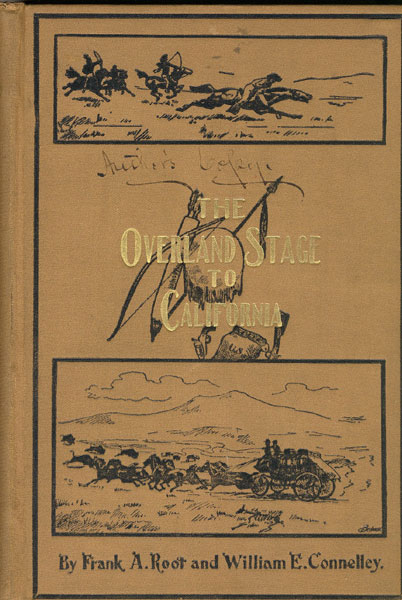 The Overland Stage To California.

First edition. Thick 8vo. Original light brown pictorial cloth, xvii [1], 630 pp., frontis., preface, acknowledgments, illustrated. plates, portraits, folding map. Preface by William Elsey Connelley. Adams Six Guns #1897: "Very rare and is considered the standard history of the early stage lines. "The map depicts the lines of the Great Overland Stage Route, the Santa Fe Trail, Butterfield Overland and Dispatch, Mormon Route of 1847, etc. Root was a messenger in charge of Express, and an Agent of the Post Office Department on the Great Stage Line across the plains to California. Signed by Connelly as "Author's Copy, William E. Connelly, 816 Lincoln St., Topeka, Kansas." On front pastedown sheet is Connelly's bookplate that is also signed by him. Flake 7417 says, "Several references to Mormons and the Utah Expedition." In a separate letter written earlier by Root he discusses his book and states in part: "For nearly seventy years I re-sided in Kansas and the Rocky Mountains. I crossed the Great Plains 32 times back and forth in the early 60's before Kansas or Nebraska had a railroad in operation." He further states "The name of W. E. Connelley appears with mine as one of the authors, but Mr. C. never wrote a page or a paragraph or sentence of the text. I gave him a third interest in the book for assisting in arranging the matter and help finding a publishing house to print it." In Connelly's hand are the inked words on the front cover, "Author's Copy," else a near fine, bright, tight copy of an important book. COWAN p.541. HOWES R434. SIX GUNS 1897. EBERSTADT MODERNOVERLANDS 414. STREETER SALE 3117. FLAKE 7417.

Tales Of The Mustang.
by J. Frank Dobie

Frontier Crossroads. Fort Davis And The West.
by Robert. Wooster