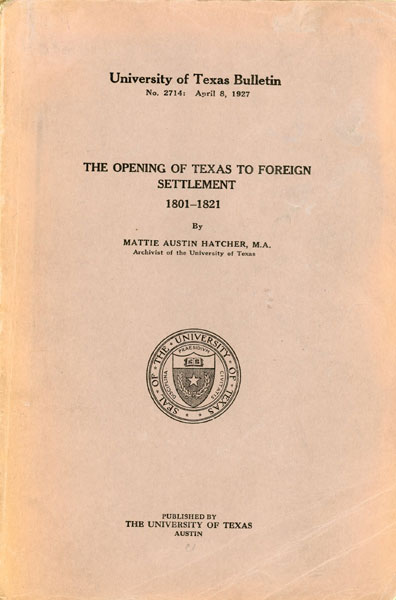 by M. A., Mattie Austin Hatcher

Publication: Published By The University of Texas, 1927, Austin

First edition. 8vo. University of Texas Bulletin No. 2714, April 8, 1927. Printed wrappers, 368 pp., preface, introduction, illustrated with five foldout maps and two census charts, appendix, bibliography, index. Jenkins, BTB 87: “A seminal study of the beginning of foreign immigration into Spanish Texas, this monograph covers the period prior to the colony of Stephen F. Austin, during which a surprising amount of immigration and settlement in Texas occurred ….still one of the best explanations and analyses of the political and cultural activities of this period within Spain, Mexico, and Texas--- activities that led slowly but inexorably to the opening of Texas to Anglo-American colonization. I doubt it is possible for anyone to fully understand the Anglo-American takeover of Texas without reading this book.” Minor wear to the cover extremities, a rather clumsy repair to the title page and a small six-digit number stamped on the bottom of the following page, otherwise, there are no other markings. and this is a very good, internally clean copy. A very scarce work that addresses a largely overlooked period of Texas history.