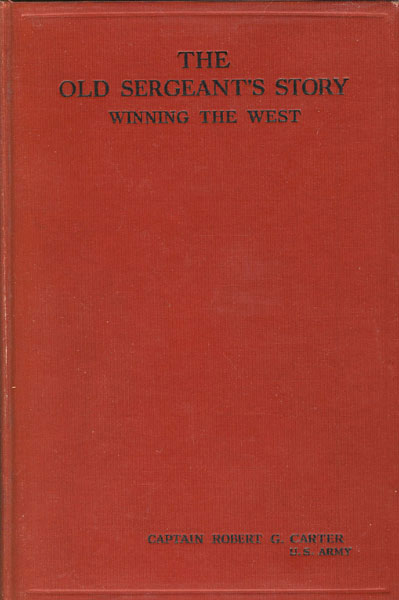 Other works by ROBERT G. CARTER

First edition. Cloth, 220pp., 8 plates. The author was a recognized Medal of Honor recipient; a participant in many campaigns against Comanche and Kiowa hostiles with Col. Ranald Mackenzie's 4th Cavalry. In 1919 & 1920, he published several pamphlets, now rare, about his Indian-fighting experiences on the southern plains. John B. Charlton, the "Old Sergeant", a comrade of Carter's throughout their years with the 4th Cavalry, read Carter's stories and wrote to Carter in 1921. This began a year and a half of frequent, lengthy correspondence between Carter and Charlton, that ended with Charlton's death in March, 1922. Through the detailed, warm correspondence between the two, Carter presents an insightful, first-hand account of the legendary campaigns of Mackenzie's 4th Cavalry from 1871 through 1874. "Mackenzie's Raid" into Mexico; the capture of outlaw "Red" McLaughlin by Charlton and, famous scout, Jack Stillwell; and the 4th Cavalry battles against the Comanches and Kiowas at McClellan's Creek, Palo Duro Canyon, and the north fork of the Red River are among the many incidents recorded. Of special interest is Charlton's account of the killing of Setank, by Charlton, when Setank, Big Tree, and Satanta were being transported to Ft. Richardson, Texas to stand trial for the killing of 7 teamsters of the Warren Wagon Train when they were attacked by Indians east of Ft. Richardson. In addition, Charlton tells Carter about his experience in Colorado, as an independent freight hauler, when, under escort of Major Thornburgh, they were attacked by Ute Indians and kept under siege for 6 days before being rescued. Charlton was hauling freight to the White River Agency in 1879, when the Utes killed Agent Meeker, captured Meeker's wife and daughter, and wreaked havoc throughout the region. Great history, and a warm and occasionally touching reflection by two "old soldiers". Indian wars historian, John M. Carroll wrote that "Carter's enormously important writings on frontier military history will be recognized as source material for all future historians." An important, first-hand record. Previous owners bookplate on front pastedown, else a fine, bright copy in protective slipcase.

Comanches. The Destruction Of A People.
T. R. FEHRENBACH