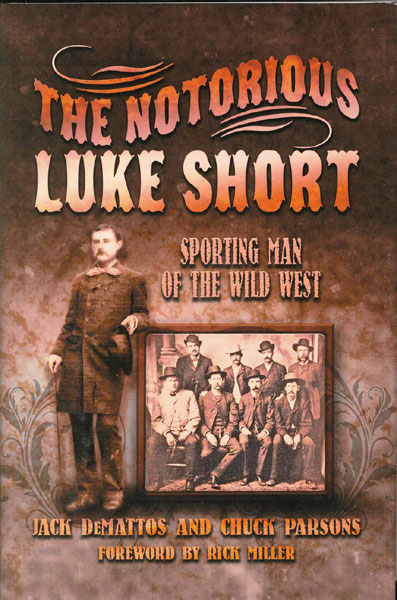 The Notorious Luke Short. Sporting Man Of The Wild West

by Jack And Chuck Parsons Demattos

First edition. 8vo. Cloth, titles stamped in gold gilt on the spine, xxii [2), 326 pp., foreword, acknowledgments, introduction, illustrated, portraits, map, facsimiles, epilogue, appendices, endnotes, bibliography, index. Foreword by Rick Miller. "Luke Short's adventures began as a teenage cowboy who followed the trail from Texas to the Kansas railheads. He then served as a scout for the U.S. Army during the Indian wars and, finally, he perfected his skills as a gambler in locations that included Leadville, Tombstone, Dodge City, and Fort Worth. In 1883, in what became known as the "Dodge City War," he banded together with Wyatt Earp, Bat Masterson, and others to protect his ownership interests in the Long Branch Saloon ... an event commemorated by the famous 'Dodge City Peace Commission' photograph." As new, unread copy in dust jacket.

The Horse And Buggy Doctor
by Arthur E Hertzler

Photograph Of Three Cowboys
by Anonymous

A Voice For The Dead. A Forensic Investigator's …
by James E. With Katherine Ramsland Starrs