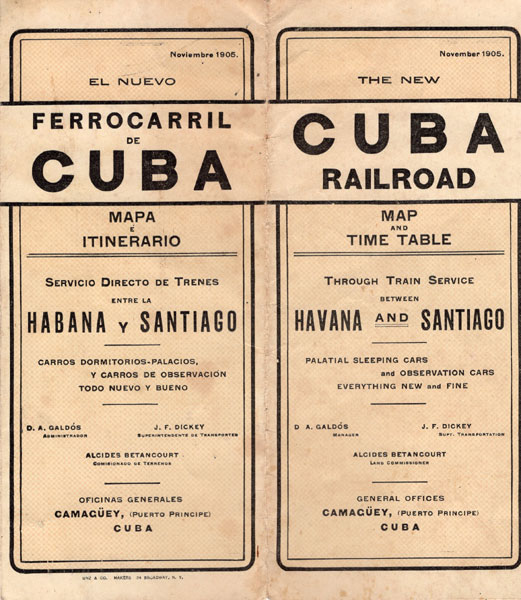 The New Cuba Railroad Map And Time Table Through Train Service Between Havana And Santiago. Palatial Sleeping Cars And Observation Cars, Everything New And Fine

First edition. 8vo. Printed wrappers, 9" x 24" one sheet, folded 9" x 4." An unrecorded map and timetable for the central route and branches of the Cuba Railroad Company in 1905. The main line, which ran through the center of the island from Havana to Santiago de Cuba, was completed in 1902, and service between the two cities began in December of that year. The route fulfilled a longstanding need for passenger and freight service between the capital and the eastern region of the country and for a connection to the agricultural interior of the country. This pamphlet prints an attractive map of the route across the island, and the service schedule in English and Spanish. The railroad was a subsidiary of the Cuba Company, the largest foreign business concern on the island during the first half of the 20th century. Covers show light use else a very good copy.

Mackinac. An Introductory Tour In Color Of Mackinac …
by James Emch

Troopers With Custer, Historic Incidents Of The Battle …
by E.A. Brininstool