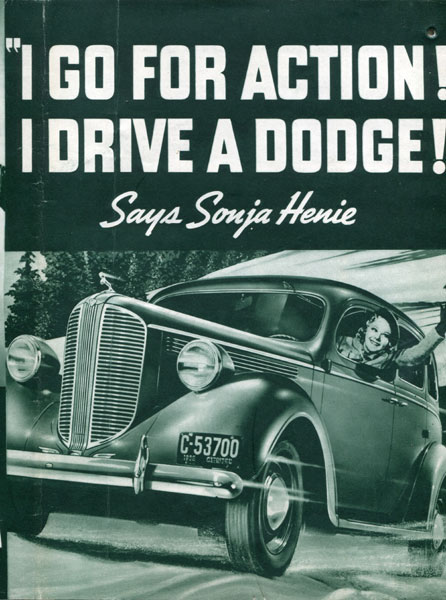 First edition. 4to. 11" x 13" pictorial wrappers, n. p. (24 pp. including covers, illustrated. A handsome presentation that enlists the endorsements from movie and radio stars, and one major league baseball player for the line of 1938 Dodge automobiles. Joe DiMaggio's picture is on the front cover and he says "Dodge Bats Highest With Me!" and a special pictorial, promotional sheet is laid-in titled "How I Learned To Bat" as told by Joe DiMaggio, famous New York Yankees Home-Run Hitter." In one picture DiMaggio is shown driving a Dodge sedan along with his personal endorsement of the car. Also providing pictorial endorsements are movie actresses Claudette Colbert and Sonja Henie (also a famous ice-skating champion), a radio star, Major Bowes, and several starlets, whose names I do not know. The booklet promotes "47 progressive new improvements and refinements more than the lowest-priced cars." Improvements include a better engine, roomy and comfortable interior, easy and simple to use steering and dials, fender and headlight design, improved windshields, etc. Cars offered for 1938 are the Touring Sedan, the Streamline Sedan, the Touring Two-Door Sedan, the Streamliner Two-Door Sedan, the Coupe, the Rumble Seat Coupe, the Convertible Coupe, the Convertible Sedan, the Seven-Passenger Sedan, and the Limousine. A light vertical fold crease, a small hole punched in at the top adjacent to the spine where this booklet was most like hung, a small closed tear to the top edge of the front cover panel, and light rubbed at the extremities, else a very good, solid and attractive copy. The promotional sheet laid-in about Joe DiMaggio is also hole-punched and the top edges have small nicks and creases but not affecting any of the printing.

Colorado, Under The Turquoise Sky
by Rock Island Lines