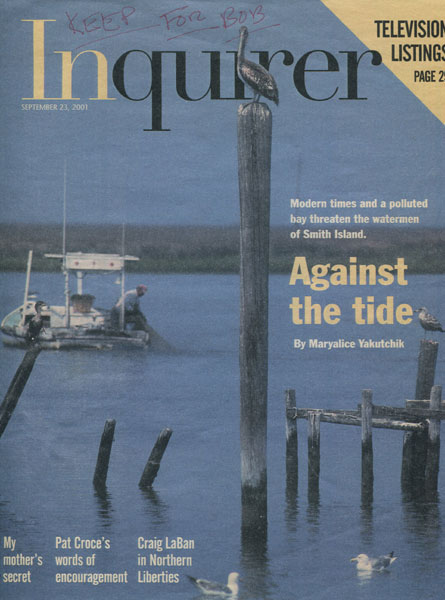 The Mysterious Elaine. In Inquirer, The Sunday Magazine Section Of The Philadelphiainquirer, September 23, 2001.

First edition. Fascinating four-page first-person narrative by the son of Elaine Withers, who never told any of her seven children that she had once been married, for two and a half years to a novelist and screenwriter named David Goodis, a Philadelphian who had a measure of success and today has a significant following both in the U.S. and France. This is the mysterious woman, Elaine, whom James Sallis mentions briefly in DIFFICULT LIVES, whom a friend of hers recalls Goodis once describing as a "Jewish Princess" in Philippe Garnier's GOODIS: A LIFE IN BLACK AND WHITE, and who, according to Goodis's Hollywood friend, Marvin Yolin, is the "redheaded woman .... with large breasts" who shows up in Goodis's BEHOLD THIS WOMAN. Laurence Withers, his movie-loving mother named him after Laurence Olivier, has researched his subjects carefully, and tells their story with little romanticizing or sensationalism. His article is illustrated with two photographs of his mother, and with a lobby card of Bogart and Bacall in Goodis's DARK PASSAGE. One of the photographs is a candid sepiatone closeup of Elaine and David Goodis at an unpretentious Hollywood eatery. She is beautiful and sexy and down-to-earth looking, like all those lost women who get mixed up with Goodis's doomed men. A "must" read, and a keeper, for any serious Goodis collector. Near fine.