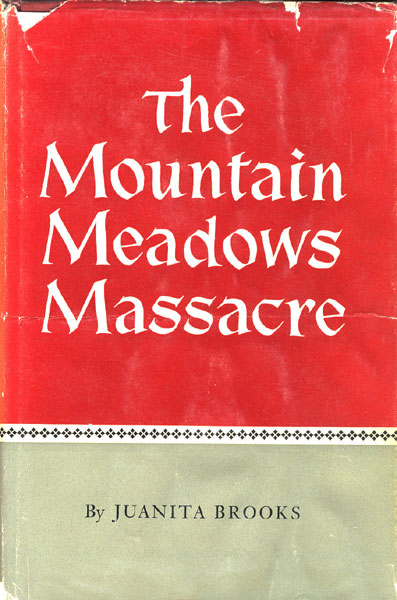 Other works by JUANITA BROOKS

First edition of the new edition. Originally published in 1950. 8vo. Red cloth, xiii [blank], 316 pp., author's statement, preface, acknowledgments, illustration, chapter notes, appendices, bibliography, index. The incident at Mountain Meadows in southern Utah where in 1857 an entire party of emigrants was slain by Mormons and Indians. The whole unpleasant episode of the massacre is examined to a new depth of scrutiny by the author. Long-buried facts are revealed, including some enlightening evidence as to the responsibility for the affair. John Doyle Lee is also examined in detail regarding his participation and ultimately being the only Mormon to stand trial and eventual execution by firing squad for his role in the whole tragic affair. Well-written and a fascinating bit of historical reading. Six Guns 287 says, "Contains much on John D. Lee and some material on Porter Rockwell." Very good in price-clipped dust jacket with moderate wear to spine ends, corners and extremities.

Tucson. The Life And Times Of An American …
C. L. SONNICHSEN