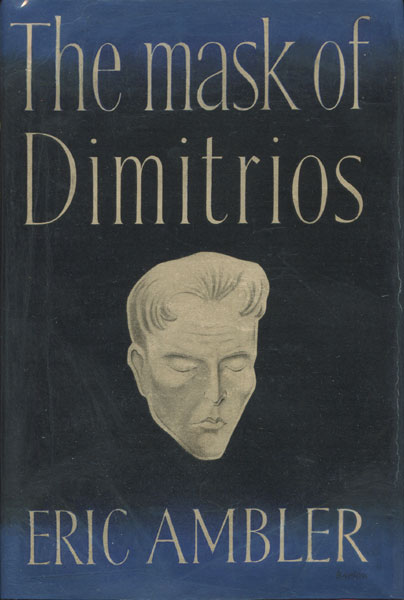 The Mask Of Dimitrios

First edition. Signed and inscribed on the title page in ink by the author to fellow mystery writer and journalist Wayne Warga, "Wayne Warga from Eric Ambler. Los Angeles, 25 February 1982. Dear Wayne, This must be the rarest of my first editions. I'm glad to have seen it again. Eric." This copy also has the bookplate of the renown mystery collector, Adrian Homer Goldstone, which is affixed to the front pastedown sheet. Near fine, bright, square copy in dust jacket with light professional restoration by an expert paper conservationist. Housed in a cloth clamshell case with a leather label on the spine and titles stamped in gold gilt. A rare book in the first edition as most copies were lost when Nazi bombs destroyed the Hodder & Stoughton warehouse during World War II. A Haycraft/Queen cornerstone of detective and mystery fiction and the basis of the classic film starring Sydney Greenstreet and Peter Lorre. As the most recent former owner of this book, Wayne Warga was the youngest editor at LIFE MAGAZINE at age 25, he reported on John F. Kennedy's race for the Presidency, and went on to cover the Civil Rights movement for the magazine. For many years, Warga was one of the leading writers at the Los Angeles Times where he did in-depth articles and features on writers and people in the arts. Later, he became a mystery novelist, creating three well-received bibliomysteries: "Hardcover," "Fatal Impressions," and "Singapore Transfer," featuring Los Angeles rare book dealer, Jeffrey Dean. A choice item with an impressive provenance.

The Man Who Could Not Shudder.
by John Dickson. Carr

The Shadow Man.
by John. Lutz