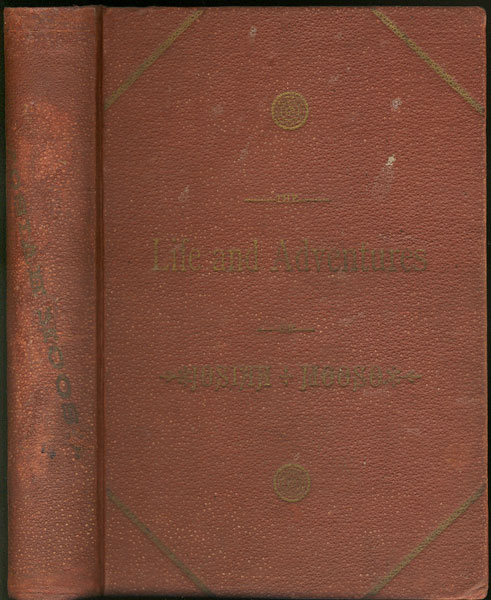 The Life And Travels Of Josiah Mooso. A Life On The Frontier Among Indians And Spaniards, Not Seeing The Face Of A White Woman For Fifteen Years

First edition. Cloth, 400 pp., preface, frontispiece (portrait). Mooso spent his boyhood in Canada and as a young man became employed by the American Fur Company. He relates an account of his overland trip to California and Oregon, and his experiences trapping on the upper Missouri and Columbia rivers. Captured by Indians, Mooso gives an exciting account of his captivity among the Columbia River Indians. Eventually escaping, Mooso traveled the Santa Fe Trail in the 1840's and relates his observations of Santa Fe and the Mexican people. Later moving on to Salt Lake City, he tells much about the history of the Mormons and the Mountain Meadows Massacre. Mooso's travels were extensive and he makes observations of Indians and their customs throughout the West. Eventually settling in Kansas, Mooso gives an account of the early settlement of Cowley County. An important work; of particular value are his experiences as a trapper, his captivity by Indians, and his account of the Mormons. Minor professional reinforcement of spine ends and inner hinges. Very good. An exceptionally nice copy of this rare work.

Outlaws In The Indian Territory: The Bill Cook …
by Lonnie E Underhill

The Saga Of John Fillmore Blake. The Last …
by Toby Giese

The Grey Pilgrim.
by J.M. Hayes