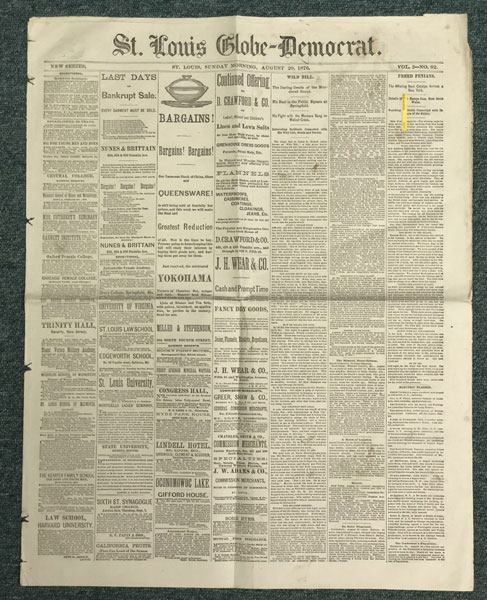 The Life And Death Of "Wild Bill" Hickok As Reported In The St. Louis Globe-Democrat, Sunday Morning, August 20, 1876

First edition. Large folio. Article appears in the St. Louis Globe-Democrat newspaper, Vol. 2, No. 92, Sunday morning, August 20, 1876. Being a copy of the St. Louis Globe Herald, with an article on the front page concerning the recently deceased James “Wild Bill” Hickock. Hickock was known throughout the country as an outstanding marksman, soldier, and frontiersman. However, his fame stemmed from his marksmanship and his gambling dealings. Having created many enemies over the course of his life, it is no wonder that he eventually met his fate: shot point-blank by a man whose brother Hickock has allegedly killed. Many believed Hickock’s murderer’s story was fabricated to ease the dishonor of killing a man in such a cowardly manner. Overall, Hickock was well loved by the people for his actions as a Marshall, and also a performer with Buffalo Bill’s Wild West Show, and this article is a testimony to just that. The article touches on a few “interesting incidents connected with his wild life, death and burial.” Minor to light wear to the edges and corners, vertical center fold to the newspaper, else a solid, very good copy.

Southwestern Town: The Story Of Willcox, Arizona.
VERNON B. SCHULTZ