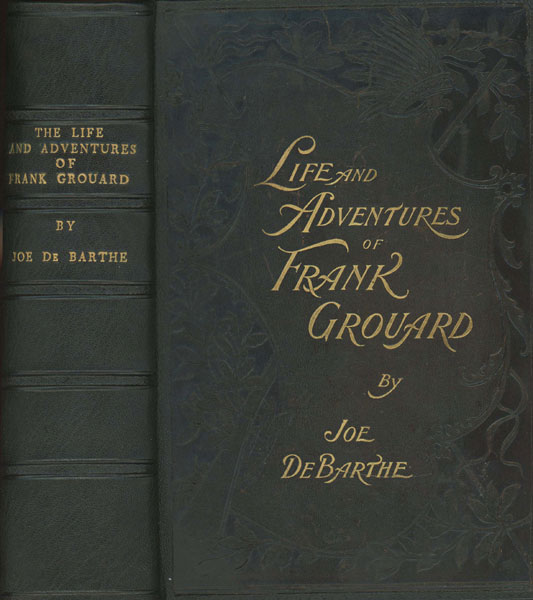 First edition. Thick 8vo. Full leather, decorated on cover and with gilt stamping, gilt stamping and raised bands on spine, 545 pp., 67 plates, most from old photos. Born in the South Pacific, Frank Grouard was the son of a Mormon missionary and a native islander. He came to Utah in 1852, and left home in 1865 at the age of 15. Four years later, while a mail carrier in Montana, he was captured by the Sioux Indians with whom he remained for the next 6 years. During this time he learned their language and became personally familiar with Crazy Horse and Sitting Bull. Grouard served as a scout for Gen. Crook during the Sioux Campaign of 1876. He was an active participant in the Battle of the Rosebud, the famous Sibley Scout, and the Battle at Slim Buttes. Grouard was highly praised by Gen. Crook; Aid-de-Camp John Bourke; and correspondent, John Finerty. As interpreter at Camp Robinson, it is alleged that Grouard's misinterpretation of statements by Crazy Horse led to the attempted imprisonment and fatal stabbing of Crazy Horse. The author relates not only the personal experiences of Grouard but also his account of events such as the Battle of the Little Bighorn as told to Grouard by participants. Much information on Gen. Crook, Custer, California Joe, "Big Bat" Pouriere, "Little Bat" Garnier, Sitting Bull, Crazy Horse, Gall, Dull Knife, etc. Huntington #231: "Of the highest importance historically; probably the most thorough and reliable work on scouting on the plains that has ever been written." A rare work...nearly the entire edition was lost in the St. Joe flood. Spine has been skillfully replaced by a master conservator, front and rear endpapers have also been replaced, else a fine, bright, tight copy. An attractive copy with bright gilt on the front cover and spine. We have found over the past several years that it is difficult to find a copy bound in leather that has not either had the spine completely replaced or with a good deal of cosmetic restoration. A rare and important work. Highly recommended.

South Dakota, Stressing The Unique And Dramatic In …
by Doane. Robinson

The Story Of American Railroads.
by Stewart H. Holbrook

Wyatt Earp In San Diego. Life After Tombstone.
by Garner A. Palenske