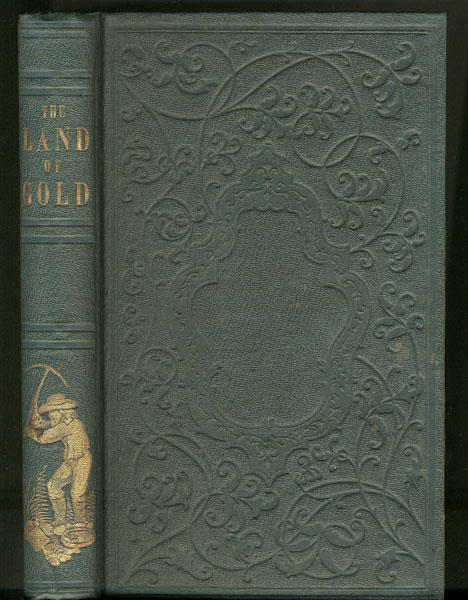 The Land Of Gold. Reality Versus Fiction.

Publication: Published for the Author, 1855, Baltimore

First edition. 8vo. Original embossed green cloth stamped in blind on front and rear panels, gilt pictorial spine depicting a miner with a pick-axe, xii, 13 - 300 pp., preface. An important and early first hand account of life in California during the Gold Rush years, the work was reprinted nearly a hundred years later using the title DREADFUL CALIFORNIA. An entertaining book with much of interest on the mines which the author visited twice. Cowan page 107 says "Helper's book was written in 1854, after California had seen the steady growth of five years. It presents in an attractive form one of the best accounts we have of early San Francisco, especially as regards its street life by day and night." His general attitude toward California was quotable, but negative: "It is my unbiased opinion that California can and does furnish the best bad things that are obtainable in America." In Chapter VII, THE CHINESE IN AMERICA, the author berates and denigrates the Chinese, stating that "one Chinaman looks almost exactly like another," and he goes on to say that "No inferior race of men can exist in these United States without becoming subordinate to the will of the Anglo-Americans ... it is so with the Negroes in the South, it was so with the Indians in New England, and it will be so with the Chinese in California." Light foxing to a few end pages else a fine, tight copy. An exceptional copy.

The Will James Books - A Descriptive Bibliography …
by Don. Frazier