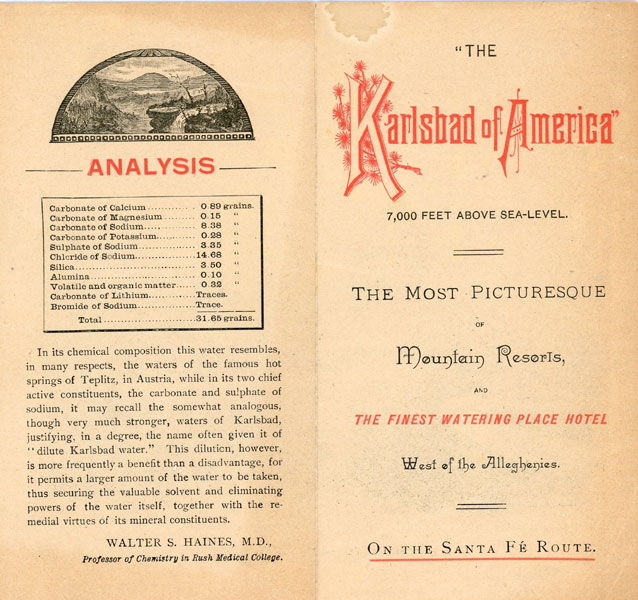 "The Karlsbad Of America." 7,000 Feet Above Sea-Level. The Most Picturesque Of Mountain Resorts, And The Finest Watering Place Hotel West Of The Alleghenies. On The Santa Fe Route

6" x 6 3/8" sheet, folded to 4 panels. Cover panel as well as panel offering analysis of the water at the Phoenix Hotel, written by Walter S. Haines, M.D., printed in red and black ink. Opposite 2 panels offer a chromolithograph of the hotel. The Phoenix Hotel was, "built in 1887 had 250 guest rooms and replaced the Montezuma Hotel, which was destroyed by fire in 1884. In 1903 the hotel closed down and in 1923 the building became a Baptist college. In the late 1980s, the site became the home of the Armand Hammer United World College and is now known as the Davis International Center. The hotel, known as the castle, was constructed by the Atchison, Topeka & Santa Fe Railroad as a luxury hotel, featuring the natural hot springs on the site. According to the pamphlet, the chemical composition of the water primarily consists of Carbonates and Sulphates of Sodium and was touted to assist with tuberculosis, rheumatism, and gout. 3/4" split to top fold along with a 1/2" water mark to top edge. Light toning to paper. Very good.

The Marquis De Mores. Emperor Of The Badlands. …
Donald Dresden

Echoes Of The Past, Pioneers Of San Juan …
CATHERINE DAVIS