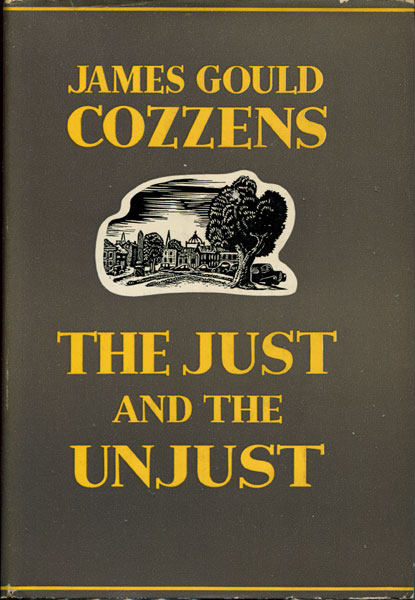 The Just And The Unjust.

First edition. Correct $2.50 price on dust jacket.Raymond Chandler's copy, with his name and La Jolla address neatly rubber-stamped on front endpaper, and the holograph name and 1944 date of the former owner (Chandler's neighbor in San Diego) directly above. An intensely dramatic view of the characters involved in a murder trial - police, victim, lawyers, and judge - set in a fictional rural town and told over the course of three days. The novel was well-received by the New York Times, the New York Herald Tribune, and was featured by the Book of the Month Club, though it caught the ire of J. Edgar Hoover, who both Cozzens and Chandler disliked intensely. Hoover wrote Cozzens, calling him a "son of a bitch" for portraying a heavy-handed FBI in his novel; he opened a file on Cozzens, citing the novel for containing "unfounded insinuations and accusations" about the Bureau (cf.Wolfe, Alan. "Writers and Agents." The Washington Post, March 22, 1992). Later, on an occasion when Hoover and Chandler were dining at the same restaurant, Hoover invited Chandler to visit his table; Chandler sent word back to Hoover and told him to "go to hell." Cozzens's wife, Bernice Baumgarten, was Chandler's literary agent for several years. After Cozzens won the Pulitzer Prize for Guard of Honor, Chandler wrote that it made "all other war novels look like amateurish exercies." In a letter to Baumgarten (December 29, 1948), Chandler wrote: "Of Jim's books I have "Guard of Honor," "The Just and the Unjust," and "S.S. San Pedro." What others should I get?" A distinguished copy of this Haycraft-Queen Cornerstone novel.

A Coat Of Varnish.
by C.P. Snow

Up Next.
by Nancy. Star