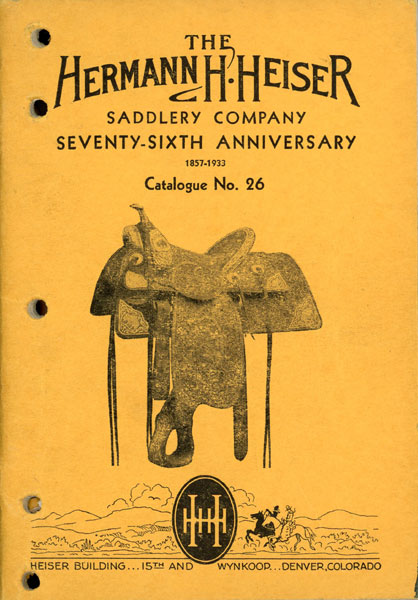 First edition. 7 5/8" x 5 1/2" pictorial wrappers. 120 pp. Illustrations. Offers illustrations of, descriptions of, and pricing for various saddles, stirrups, bridles, saddle pockets and bags, chaps, cuffs, gloves, spurs, Indian blankets, saddle pads, etc. Born and raised in Germany, Hermann H. Heiser (1836-1904) immigrated to New York City in 1854. He spent time in Iowa and Wisconsin perfecting his trade. In 1858, Heiser opened his first saddlery and harness business in Iowa County, Wisconsin. After working diligently and establishing a reputation for making very good saddles, gun leather and farming harness equipment, Heiser's health began to suffer. Under the advice of his doctor, in 1863 Heiser took a load of freight across the plains to Denver. After a short stay in Denver for the winter, Heiser relocated to Black Hawk, Colorado, where he reopened his Saddlery & Harness business along with another saddle maker in 1864. By 1865 the two had opened a second location at Central City, Colorado. Now in the West, Heiser solidified his reputation as a superior leatherman and people were seeking all the goods his saddlery & harness business could produce, including harness goods, tack and cowboy accessories. After maintaining a partnership and the 2 locations for 10 years, Hermann H. Heiser turned the businesses over to his partner saying he did not want to have anything to do with ill gotten goods. So he walked away empty. In 1874 Heiser purchased the saddlery & harness business of William Merchant in Denver and renamed "The Hermann H. Heiser Saddlery Company." By 1878 Heiser's business had grown so much that he felt it necessary to register his Triple H Trademark with the State of Colorado, making that the 9th Registered Trademark in the State of Colorado. Through the use of cabinet card advertising and later the use of mail order catalogs, The Hermann H. Heiser Company became known not only nationwide but worldwide in the early part of the 1900s. The Hermann H. Heiser Company became the first to utilize high speed leather sewing equipment, propelling the business even more. In 1904 Hermann H. Heiser turned the everyday management of the business over to one of his sons and at that time planned a trip back to his native Germany. While visiting his sister, Hermann's health deteriorated and he died on September 12, 1904. Heiser’s sons held a family meeting and decided they wanted to keep running the family business. The brothers helped the business continue to grow and by 1917 The Hermann H. Heiser Company was the largest manufacturer of saddlery goods in the West. The company remained a family business for eighty-seven years. Hole punched to entire spine area and apparently maintained in a binder for protection and in very good condition. A nicely produced catalog.