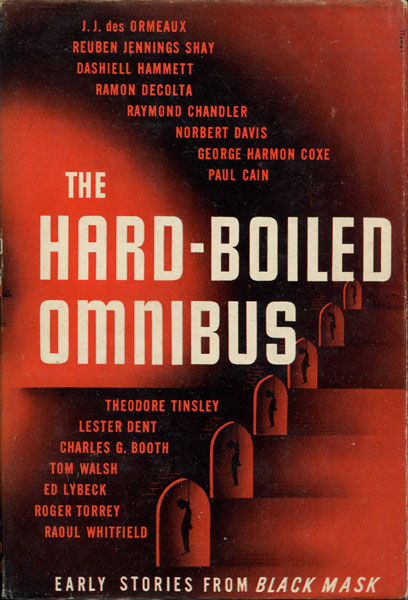 Joseph T. Shaw [Edited And With An Introduction By]

First edition. Inked gift inscription by Joseph Shaw on the front fly leaf. Review copy with review card laid-in. Joseph T. "Cap" Shaw (1874 - 1952) was the editor of Black Mask magazine from 1926 to 1936. Black Mask was the most important pulp magazine published in the United States. It was founded in 1920 by H. L. Mencken and George Jean Nathan, it published traditional thrillers and adventure fiction but is remembered today chiefly for its detective stories. The hard-boiled school of tough private detectives was begun by Carroll John Daly and his character, Race Williams, and continued with Dashiell Hammett, Erle Stanley Gardner, Raymond Chandler, George Harmon Coxe, Frank Gruber, and other prolific writers of fast-paced, violent, cynical, yet romantic crime tales. The magazine achieved preeminence under the editorship of Joseph T. Shaw. Under his editorship, Black Mask published many works of crime fiction now recognized as classics of the genre, by authors such as Dashiell Hammett, Raymond Chandler, and Erle Stanley Gardner. Chandler greatly admired Shaw's ability to encourage Black Mask writers, claiming in a letter, "We wrote better for him than we could have written for anybody else." Despite Black Mask's critical and commercial popularity, Shaw was eventually fired from the magazine. Black Mask survived as a viable periodical into the 1940s, but later published mainly reprints. Shaw died in Manhattan aged 77. This omnibus edition contains 15 stories and for the most part are novelette in length. Stories by Dashiell Hammett, Raymond Chandler, Norbert Davis, George Harmon Coxe, Paul Cain, Raoul Whitfield, Lester Dent, and 8 other prominent Black Mask writers. Top front corner has a minor bump else near fine in dust jacket with minor wear to the spine ends and corners. The signature of Joseph T. Shaw is uncommon, this being the second one we have seen.

The Paris Drop.
by Alan Furst

The Girl From Venice
by Martin Cruz Smith