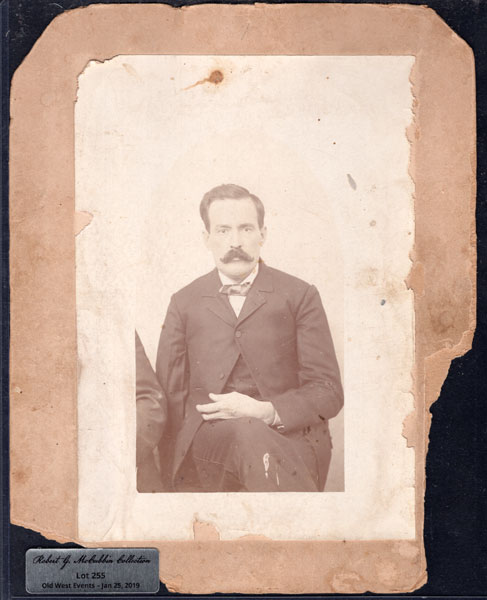 Born Thomas E. Ketchum in 1863 in San Saba County, Texas. Black Jack worked as a cowboy in the Pecos Valley area of New Mexico in the early 1890's before drifting into outlaw life...robbing banks, stagecoaches and trains. Frequently accompanied by his brother Sam, Tom's gang included Dave Atkins, Wild Bunch member Will Carver, Butch Cassidy's close ally William Ellsworth "Elzy" Lay, as well as Bruce "Red" Weaver, and Edwin Cullen. Black Jack's biggest haul came from the robbery of a Southern Pacific train in May 1897, near Lozzer, Texas, netting nearly $50,000 of Wells Fargo money. Shortly thereafter, they robbed another train near Folsom, New Mexico. Almost 2 years later, after the break-up of his gang, Black Jack by himself attempted to rob a train in nearly the same location. During this ill-advised effort on August 16, 1899 Black Jack was severely wounded by buckshot in his right arm and was captured near the railroad the next day by Sheriff Pinard of Clayton, New Mexico and his posse. His badly injured arm was amputated a few weeks later as he awaited trial. Black Jack was convicted on October 5, 1900 and sentenced to hang under a New Mexico law making "molesting a train" a capital crime. The famously gruesome hanging of Black Jack Ketchum took place on April 26, 1901, as miscalculations by the inexperienced hanging crew resulted in Ketchum's decapitation! Large format original photographs. Seated portrait: 7.375" x 5.75," Mount 10" x 8." Series recording hanging: Variously 6" x 8.125" or 8.125" x 6," Mounts 8" x 10" or 10" x 8." While original mounts have considerable chipping to most, the photographs are clean & clear, with very slight wear to edges of portrait, and minor damage to a few corners of the series. This series of photographs begins with a photograph of Black Jack taken inside the jail the morning of the hanging. The other 5 photographs present the sequence of the hanging culminating in the gruesomely infamous photograph of Black Jack's decapitated head & body. A rare & important set of photographs of the most famous legal hanging in the history of the American West!

In The Shadow Of The Malpais.
CLARENCE S. AND JOAN N. ADAMS ADAMS

Desperado From Cowboy Flat. The Saga Of "Zip" …
GLENN SHIRLEY