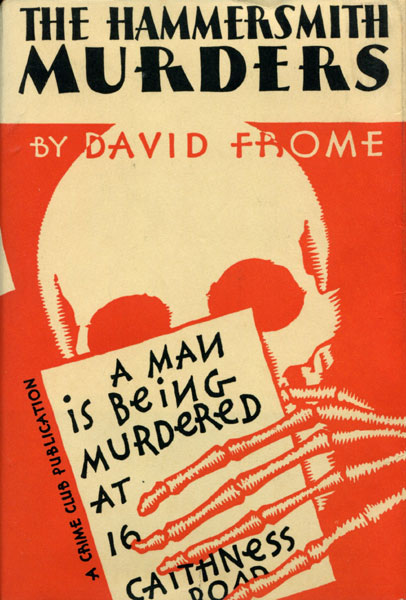 Later edition (Most likely printed later in 1930). First state of the original dust jacket. Pseudonym of Zenith Jones Brown, who also wrote using the pseudonym of Leslie Ford. Former owner's neat inked signature on the half-title page, and cloth spine faded somewhat, else a very good copy in price-clipped dust jacket. "A man is being murdered at 16 Caithness Road, is the cryptic message received by the Commissioner of the C. I. D. in an envelope postmarked HAMMERSMITH. Inspector Bull traveled to 16 Caithness Road and found a man who had just died, but the doctor said his death was caused by tetanus. A curious fact uncovered by the Inspector was that the dead man's father had been killed quite recently in a bus accident and that his daughter had been present at both events. From this beginning, two more murders and a series of robberies occur before the criminal is finally captured while preparing to commit the most terrible murder of all. An early Crime Club and Haycraft/Queen title. Interestingly this dust jacket appears in full color in the middle of Ellen Nehr's "Doubleday Crime Club Compendium 1928-1991," reserved for a showing of Crime Club vintage dust jackets.

Nine Lives Are Not Enough.
by Jerome. Odlum

The Red Box. A Nero Wolfe Mystery
by Rex Stout