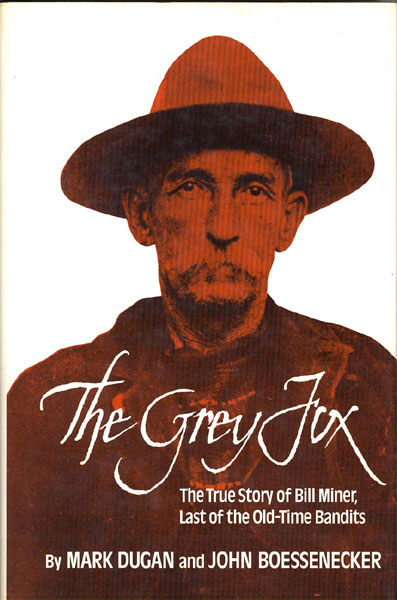 The Grey Fox. The True Story Of Bill Miner-- Last Of The Old-Time Bandits

by Mark And John Boessenecker Dugan

First edition. 8vo. Cloth, titles stamped in brown on the spine, olive green front and rear endpapers, xxiv, 260 pp., preface, acknowledgments, introduction, prologue, frontispiece, illustrated, portraits, maps, epilogue, chronology, appendix, notes, bibliography, index. Active for more than four decades, Bill Miner, the last of the old-time bandits, came closest to matching the popularity of England's legendary Robin Hood. He began his criminal career in the 1860s and ended it in 1911. He considered his victims as corporations rather than people, and he did not consider it wrong to rob, for instance, the Canadian Pacific Railway, which he considered to have plenty of money. As new, unread copy, in dust jacket.