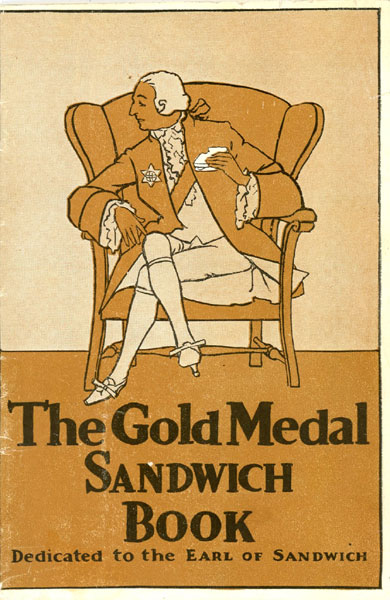 The Gold Medal Sandwich Book. Dedicated To The Earl Of Sandwich. (Cover Title)

5" x 3 1/2" original stapled, color, pictorial wrappers, 35 pp., illustrated, index. The publisher is the miller of Gold Medal Flour, a necessary ingredient for bread, which in turn is the critical component of, you guessed it, a sandwich (unless of course you order protein style). "The story is that the Earl of Sandwich was an inveterate card player, and rather than leave the game he bade an attendant bring him a bit of meat between two slices of bread, which he ate while continuing to play." Includes dozens of sandwich recipes. The company can trace its history to the Minneapolis Milling Company, incorporated in 1856. The company was founded by Illinois Congressman Robert Smith, who leased power rights to mills operating along the west side of Saint Anthony Falls on the Mississippi River in Minneapolis, Minnesota. Cadwallader C. Washburn acquired the company shortly after its founding and hired his brother William D. Washburn to assist in the company's development. In 1866 the Washburns got into the business themselves, building the Washburn "B" Mill at the falls. At the time, the building was considered to be so large and output so vast that it could not possibly sustain itself. However, the company succeeded, and in 1874 he built the even bigger Washburn "A" Mill. In 1877, the mill entered a partnership with John Crosby to form the Washburn-Crosby Company, producing Winter Wheat Flour. That same year Washburn sent William Hood Dunwoody to England to open the market for spring wheat. Dunwoody was successful and became a silent partner. In 1880, Washburn-Crosby flour brands won gold, silver and bronze medals at the Millers' International Exhibition in Cincinnati, causing them to launch the Gold Medal flour brand. In 1924, the company acquired a failing Twin Cities radio station, WLAG, renaming it WCCO (from Washburn-Crosby Company). General Mills itself was created in June 1928 when Washburn-Crosby President James Ford Bell merged Washburn-Crosby and 28 other mills"....Wikipedia. Covers lightly used with light wear to the spine and extremities and a small closed tear to the bottom edge of the rear cover.

In The Early Days Along The Overland Trail …
GILBERT L. COLE