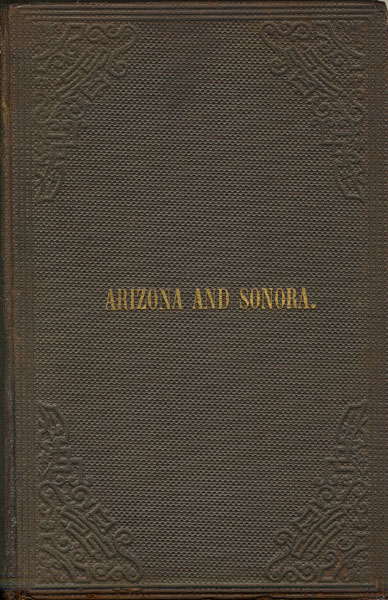 The Geography And Resources Of Arizona And Sonora : An Address Before The American Geographical And Statistical Society

Other works by SYLVESTER MOWRY

Second edition. Originally published in 1859. 8vo. Brown cloth, titles stamped in copper gilt on the front cover, 3-124 pp., preface, folding map, errata slip. This is a new edition that includes an appendix. Mowry says in his preface "Since the delivery of the following address, more than four years since, I have made several journeys in Sonora and Arizona, and have resided about a year at my place 'Mowry Silver Mines' in Arizona." Further he points out the great opportunities available for the development of mines both in Sonora and Arizona whereby the governments will cooperate to encourage monetary contributions by foreign capitalists. He also promotes that with the large military force in Arizona will restore order, guarantee capital and labor, and subdue or exterminate the hostile Apaches. Former owner's name on front fly leaf, minor to light foxing throughout, else a very good copy.