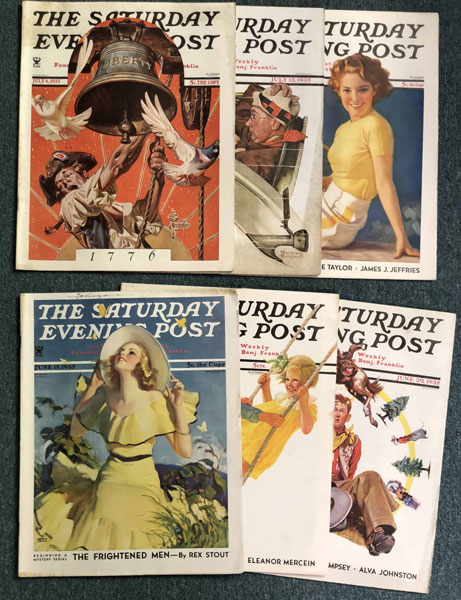 First edition. Six large quarto issues (34.75 cm), color, pictorial wrappers, 108, 100, 80, 92, 84, 80 pp., illustrated. All illustrations by Rico Tomaso. First appearance of Stout's second Nero Wolfe novel, published by Farrar & Rinehart as The League of Frightened Men on August 14, 1935. One of the genre's most influential works, in which a group of men, fearing for their lives and suspecting an old college mate of killing them off one by one, appeal to Nero Wolfe for protection. The serial is brought to life by handsome illustrations throughout by Rico Tomaso. A Haycraft-Queen Cornerstone title, and very uncommon in this format. Light wear, occasional creasing, and short tears to edges; inked name to upper margin of June 15th issue; modest foxing and dustiness to front wrapper extremities, though clean internally; Very Good+, without postal markings or mailing labels. Housed in a cloth clamshell case with titles stamped on the front cover and spine.

The Pusher.
by Ed. Mcbain

The Muse
by Jessie Burton