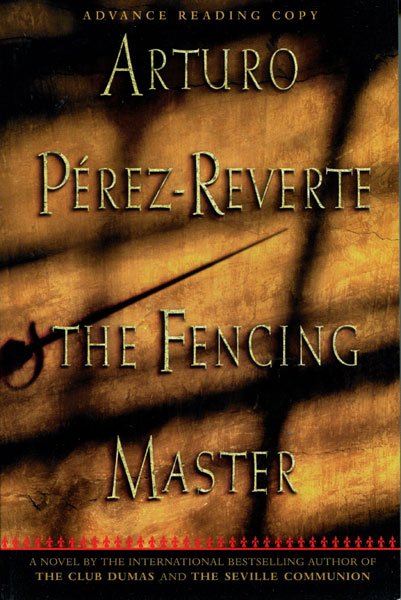 First U.S. edition. Advance reading copy. Originally published in Spain. Fine in pictorial wrappers. Revolution is in the air in Spain in 1868. Fewer and fewer of the Spanish nobility continue to study fencing ... and of those who do, increasingly think of it as a sport rather than a matter of honor and ritual that teaches lessons about comportment, attention, responsiveness to others, and taking responsibility for one's own life. Aging fencing instructor Don Jaime Astarloa has only one student, former government minister Marquis Luis de Ayala, who seems to approach fencing with the right attitude. And then Arstarloa is approached by the beautiful Adela de Otero, asking to be taught "the perfect thrust." Not long afterward, Adela is taken over by one of Astarloa's aristocratic clients, Luis de Ayala. Soon after, Ayala is found dead, killed by the "perfect thrust" invented by Don Jaime and taught to a select few ---- including Adela! Don Jaime finds himself involved in a plot that leads to the ultimate duel.

The Turning Sword.
by Spencer. Bayne

The Diehard.
by Jon A. Jackson