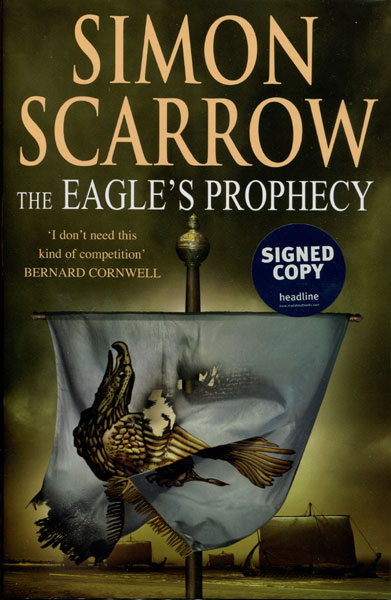 First edition. Signed by the author on the title page. As new, unread copy in dust jacket. AD 45, Centurions Marco and Cato, detained in Rome following an investigation into their involvement in a fellow officer's death, are made an offer they can't refuse. Narcissus, the devious Imperial Secretary, gives them the job of retrieving three vital scrolls stolen by pillaging pirates. Their officer-in-charge is the hated Vitellius and the three of them set sail with the Imperial fleet with their own personal destiny and that of the whole Empire resting in their hands. "An author called Simon Scarrow has included in his latest novel representations of four of my characters and a depiction of Fountain Court. In writing about the characters, he has shown Falco's father as a drunk who beats up his family and his mother as crushed and downtrodden. Upon representations by Random House and me, Headline generously froze stocks of the book, which delayed publication. After taking legal advice, I have agreed that editions of this book which are already printed may be issued, and in return Mr Scarrow's publishers have promised that the offending passages will subsequently be removed. Mr Scarrow has given an undertaking not to use my material again."---Lindsey Davis. All future editions of this novel, including paperbacks, will have references to her characters removed.

The Band Of The Red Hand
by Margaret Rau

The Alarming Clock.
by Michael. Avallone