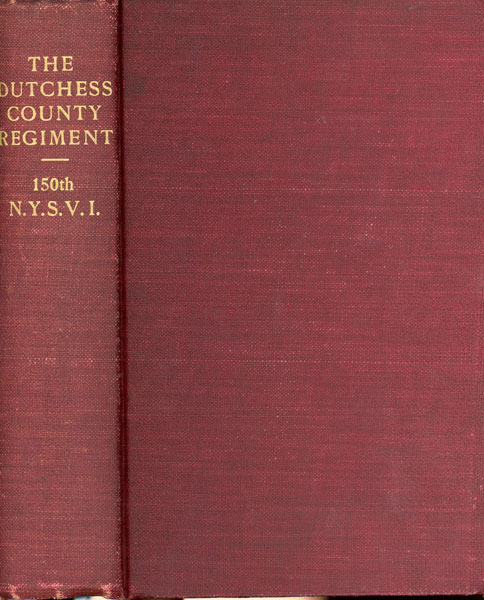 The "Dutchess County Regiment" (150th Regiment Of New York State Volunteer Infantry) In The Civil War, Its Story As Told By Its Members

First edition. 8vo. Maroon colored cloth, titles stamped in gilt on the spine, xv [1], 512 [2] pp., frontispiece [portrait of John H. Ketcham], preface The 150th New York Volunteer Infantry Regiment was an infantry regiment in the Union Army from October 1862 until June 1865. At Gettysburg on July 3,it destiguished itself at Culp's Hill and prevented the Confederates from breaking through. Memoirs from the surviving members of the Dutchess County Regiment during the Civil War and a regimental history. Information on the Battle of Gettysburg, the Battle of Resaca, enemy retreats to Kenesaw Mountain, the Siege of Atlanta, from Atlanta to Milledgeville, Milledgeville to Savannah, Savannah to Goldsborough, and from Goldsborough to home. Numerous personal sketches are provided. Inked non-authorial inscription on front pastedown sheet and on preliminary sheet and a few lightly penciled margin notes, else a very good, tight copy.

History Of The Sheep Industry In Arizona
by Bert Haskett

The Earp Decision
by Jack Demattos