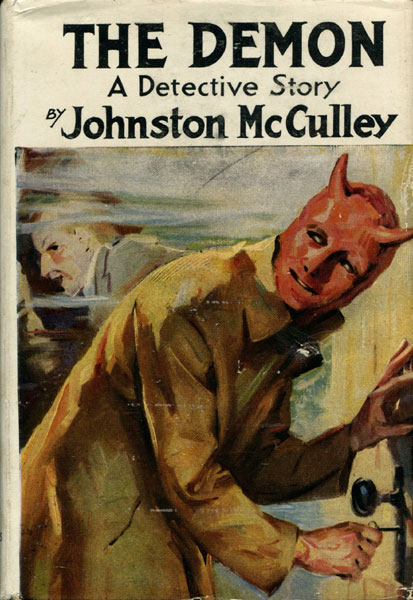 The Demon. A Detective Story

First edition. Near fine, clean, bright copy in dust jacket lightly rubbed along front flap fold and minor wear to the corners. Johnston McCulley (1883-1958) was a prolific author who wrote both Westerns and crime thrillers. McCulley created one of the most popular fictional characters of all time -- Zorro, the fox. Zorro first appeared in the serial THE CURSE OF CAPISTRANO published in the pulp magazine ALL STORY WEEKLY in 1919. The character received a very popular reception and therefore was made into the movie THE MARK OF ZORRO (1920) brought to life by Douglas Fairbanks. As the popularity of the character grew, McCulley published the original story in book form in 1924, using the title of the Fairbanks film. The underworld became aware and frightened by a sinister criminal that came on the crime scene and was known as THE DEMON. Then a big-time crook murdered his arch enemy and put tried to put the blame on this new criminal known as THE DEMON.

Pale Kings And Princes.
by Robert B. Parker

Murder At The Aba. A Puzzle In Four …
by Isaac Asimov