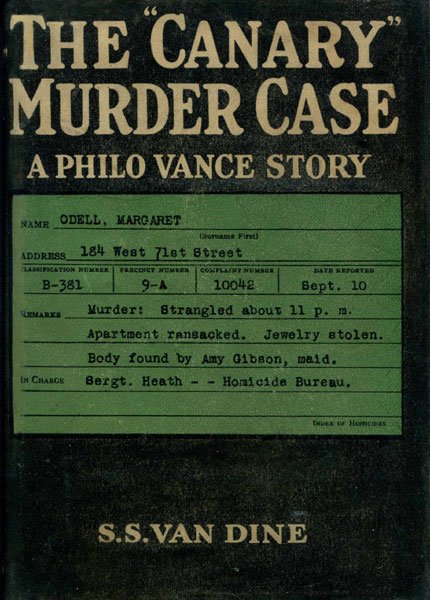 First edition. Author's second Philo Vance mystery. Near fine with lettering on front cover and spine bright and unfaded, in second state dust jacket professionally restored at spine ends, corners, and extremities. The second state dust jacket has the words "The Greene Murder Case" for the forthcoming third book of the series listed on the rear flap. The earliest state of the dust jacket lists "The Taxicab Murder Case" as the forthcoming third book in the series. Margaret O'Dell, a blackmailing musical comedy star, is found strangled in her apartment, and four men come under suspicion: Lindquist, a half-mad doctor in love with Margaret; Cleaver, a politician whose career she threatened; Mannix, a fat broker with a jealous wife; and Jimmy Spotswoode, a young society boy Margaret was attempting to blackmail into marriage. Jimmy is arrested, and Philo Vance, a whimsical society man and amateur detective who is a close friend of Jimmy's father, is called in on the case. A Haycraft/Queen Cornerstone title and an uncommon book.

Jewel Mysteries I Have Known: From A Dealer's …
by Max. Pemberton