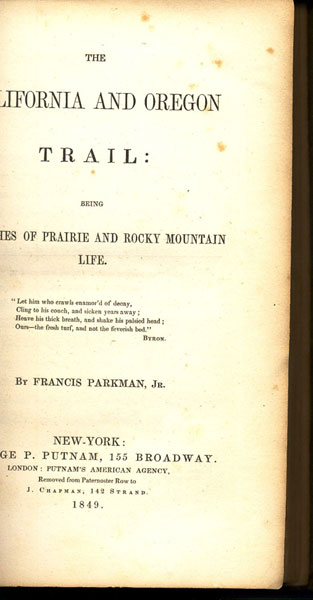 The California And Oregon Trail: Being Sketches Of Prairie And Rocky Mountain Life.

First edition. Second printing. Includes the terminal advertisement pages numbered 1 through 6 and 8, worn type at the edges of pp. 436 and 437. One of 500 copies. There were 1,000 copies of the first printing published a month earlier in 1849. 8vo. Original bluish gray blind stamped cloth, titles stamped in gold gilt on the spine, 448 (7) pp., frontis., pictorial half-title. One of the classic overland narratives. Field 1177 says "Mr. Parkman had all the genuine love of adventure of a frontiersman, the taste for the picturesque and romantic of an artist, and the skill in narration of an accomplished raconteur. It is not too high praise of his work to say, that his pictures of savage life are not excelled by the narratives which had their birth in the personal experience of Washington Irving, or the imagination of Fenimore Cooper." Rittenhouse 450 says "Although generally considered to be only an Oregon Trail item, the last part of this work describes a journey by Parkman down the Arkansas River and along the SFT in 1846, during which he met U.S. military units marching west." Former owner's inked name and date (1851), lightly foxed throughout, rebound with original spine laid-down, with light cosmetic restoration to the spine ends and corners, else a very good copy. A most serviceable copy. GRAFF 3201. HOWES P97. FIELD 1177. RITTENHOUSE 450. RADER 2608. WAGNER/CAMP 170 1b. COWAN p. 474. FLAKE 3277. MINTZ 359. STREETER SALE 1815. HOLLIDAY SALE 853.

An Englishman's Arizona, The Ranching Letters Of Herbert …
by Herbert R. Hilsop

The Spurs.
by W.J. Elliot

Broncho Charlie. A Saga Of The Saddle.
by Gladys Shaw. Erskine