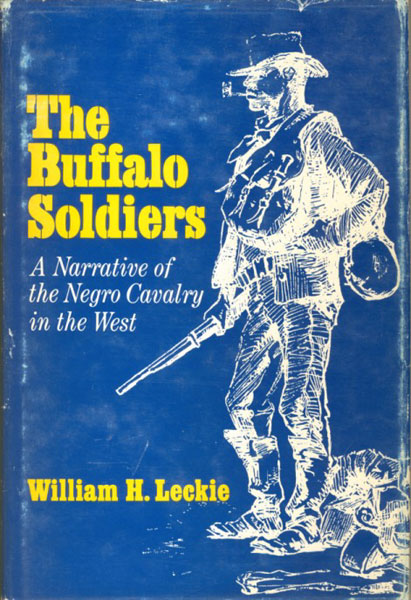 The Buffalo Soldiers. A Narrative Of The Negro Cavalry In The West.

First edition. 8vo. Original yellow cloth, xiv, 290 pp., foreword, illustrated, maps, list of abbreviations used in footnotes, bibliography, index. At the close of the Civil War, black soldiers, who wished to remain in the U.S. Army, were organized into the Ninth and Tenth Cavalry Regiments, and their service in controlling Indians on the Great Plains during the next twenty years was as invaluable as it was unpraised. The buffalo soldiers chased renegade Indians into Mexico from Texas, New Mexico, and Arizona, at whose borders government policy all too often forced them to halt. This long-neglected story of their frustration, courage, and un-complaining devotion to duty as guardians of the Western frontier adds a new dimension to frontier and military history. Former owner's name stamped on front fly leaf, else fine in moderately rubbed, price-clipped dust jacket with light wear to spine ends and the extremities.