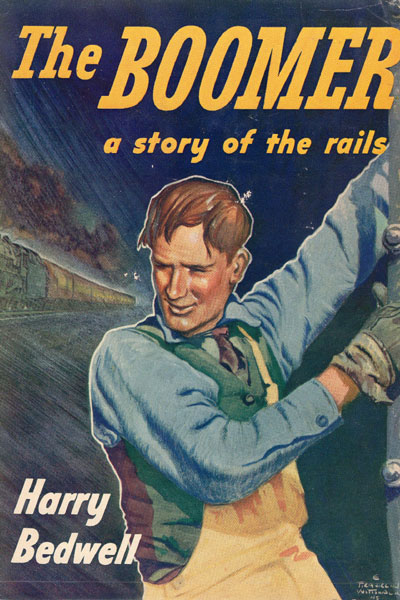 The Boomer. A Story Of The Rails

Other works by HARRY BEDWELL

First edition. 8vo. Light blue cloth, titles stamped in red on the front cover and spine, 318 pp. Dust jacket design by E. Franklin Wittmack. Harry Bedwell's The Boomer portrays an elite fraternity of railroad men ... men who were driven by one of the defining elements of the American character: a desire to wander. They were the glamour and glory of railroading, and no one was better equipped to tell their story than Bedwell. He reveals the behind-the-scenes battles that were fought to keep the trains running. Originally published in 1942, Harry Bedwell's The Boomer is widely considered the best railroad novel ever written. "An exciting yarn in sinewy prose . . . it has almost everything except sound effects." ... New York Herald Tribune. Harry Bedwell (1888–1955) is the author of more than sixty short stories. The Boomer is his only novel. Tiny "ding" to top front corner, else a fine, bright, square copy in dust jacket with minor wear to the spine ends and corners and to the extremities. An exceptional copy.

Expose Of Polygamy In Utah. A Lady's Life …
MRS T. B. H. STENHOUSE