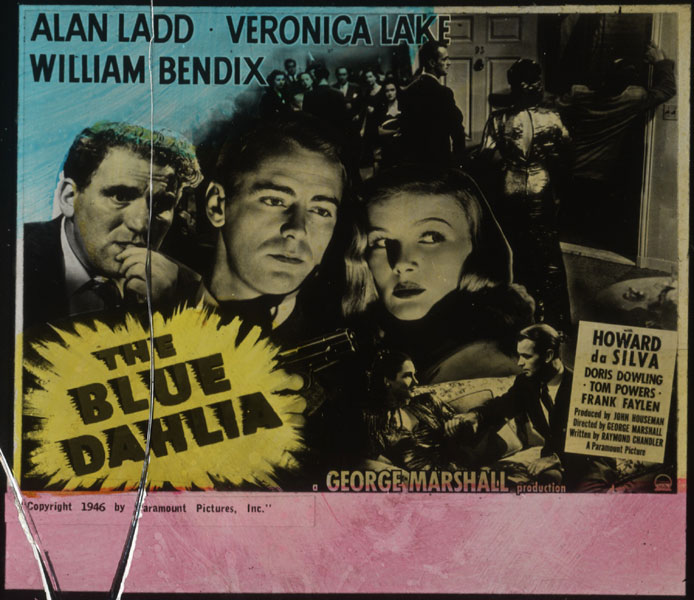 This Paramount film was Chandler's only solo screen-writing credit for which he received an Oscar nomination and in James Agee's judgement that it was, "barring occasional victories and noble accidents, about as good a movie as can be expected from the big factories." The 3" x 2-1/4" glass slide shows black & white close-ups of all three stars, plus action vignettes. It is hand-tinted in blue, yellow, and pink, with no writing in the space provided to crayon in the dates of its local showing. By 1946, few theater operators were still using slide projectors, as they had since the silent movie era, to announce coming attractions, and this was one of the last slides Paramount would manufacture for that purpose. It was produced in only a very small fraction of the numbers of posters and lobby cards that were printed, and because of its fragile nature, few examples have survived. This slide has a peripheral crack on one side but it does not affect the image, else in very good condition and apparently unused, in a 4"x 3-1/2" cardboard mount, stamped on one border with the title, and with die-cut cardboard inserts to protect the fragile glass from breakage. This is the only the second example we've seen for this title and none has been offered at auction, to our knowledge, for the past several years, during which time a number of one-sheet posters of The Blue Dahlia have sold in the $3000 to $5000 price range.

The Book Of The Dead.
by Robert Richardson

The Ceiling Of Hell.
by Warren. Murphy