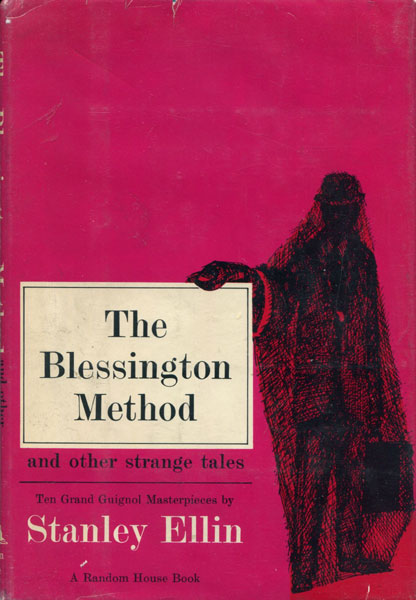 The Blessington Method And Other Strange Tales.

First edition. Fine in lightly rubbed dust jacket with light wear to spine ends and extremities, and one tiny chip along top edge of front panel. The Blessington Method, was the 1956 Edgar Award winner for Best Short Story. It originally appeared in Ellery Queen Mystery Magazine. 20th Century Crime and Mystery Writers says, "Again many of the 10 stories deserve special mention. You Can't Be A Little Girl All Your Life, is the story of a rape, with the identity of the rapist revealed only at the end. It is one of Ellin's few attempts at a whodunit in the short form, and one of the best stories in the volume. The Day Of The Bullet tells of the murder of a Brooklyn rackets boss, with a flashback to an incident in his boyhood. The Nine-To-Five Man is a memorable tale of a typical working day in the life of a man who just happens to be a professional arsonist. And The Question is also about a professional man--an executioner who must face his son's question about the work he does." Good reading.

The Wycherly Woman.
by Ross. Macdonald

Fall Of Giants.
by Ken. Follett

Ritual In The Dark.
by Colin. Wilson

The Case Of The Nervous Accomplice
by Erle Stanley Gardner