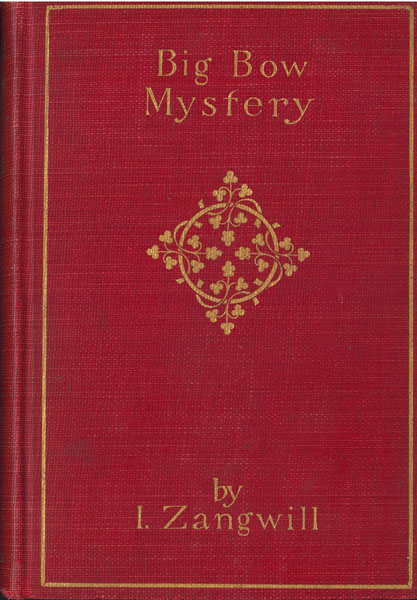 Other works by ISRAEL Z ZANGWILL

First U. S. edition. Originally published in the U. K. in wrappers in 1892. Fine, bright, copy of Queen's Quorum 15. One of the earliest "Locked Room" mysteries. Queen's Quorum 15 says "In the Introduction written especially for the 1895 edition, Mr. Zangwill revealed: 'For long before the book was written, I said to myself one night that no mystery-monger had ever murdered a man in a room to which there was no possible access. The puzzle was scarcely propounded ere the solution flew up and the idea lay stored in my mind till, years later.... the editor of a popular London evening paper, anxious to let the sea-serpent have a year off, asked me to provide him with a more original piece of fiction.' A more original piece of fiction indeed! Israel Zangwill added simple, daring, brilliant ingenuity to Poe's original concept of a 'sealed room' mystery, and thus founded a modern dynasty of locked-room magicians whose current emperor is the ever-surprising John Dickson Carr." Please know there were other locked-room mysteries written between Poe in 1841, and Zangwill in 1892, but the Zangwill mystery was solved by actual detection. The 1946 Warner Brothers film The Verdict that starred Sydney Greenstreet and Peter Lorre was based on this book. An exceptional copy of Queen's Quorum 15 and Haycraft/Queen Cornerstone title.