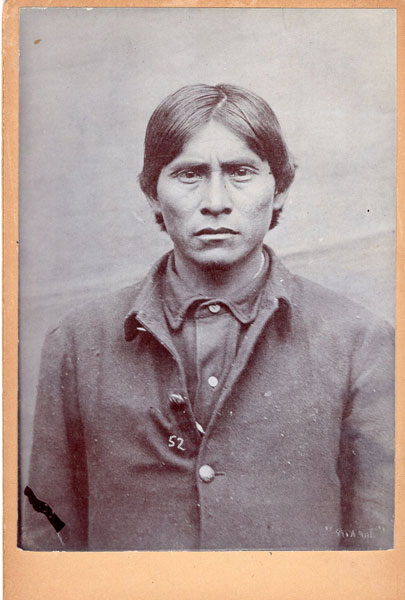 Cabinet Card. 5.5" x 4", Mount 6.375" x 4.25." Born in the 1860s in Arizona's Aravaipa Canyon, Haskay-bay-nay-ntayl, better known as the Apache Kid, was captured by Yuma Indians as a boy, and after being freed by the U.S. Army, he became a street orphan in army camps. As a teenager, in the mid-1870s, the Kid met and was essentially adopted by Al Sieber, the Chief of the Army Scouts. A few years later, in 1881, the Kid enlisted with the U.S. Cavalry as an Indian scout, in a program designed by General George Crook to help quell raids by hostile bands of Apache. He worked as a scout under Al Sieber and by July 1882 he had reached the rank of sergeant. The following year he accompanied General George Crook on the expedition of the Sierra Madre. He worked on assignment both in Arizona and northern Mexico over the next couple of years, but in 1885 he was involved in a riot while intoxicated, and to prevent his being hanged by Mexican authorities, Sieber sent him back north. In 1887 the Apache Kid was left in charge of the guardhouse at San Carlos. He left his post in order to hunt down the man he believed was responsible for the murder of his father. On his return to the guardhouse there was an argument with Al Sieber. During the dispute someone shot Sieber in the ankle. The Apache Kid was captured shortly thereafter, tried in a court-martial and sentenced to death by a firing squad, later reduced to life in prison. In 1888, his conviction for the murder of his father's killer was overturned, but the Apache Kid was arrested, this time for attempted murder of Al Sieber. In this trial, the Apache Kid was found guilty and sentenced to seven years in prison. In route to the prison, the Kid and several other prisoners escaped. During the escape, one guard was killed, another died of an apparent heart attack and a third was wounded. Over the next several years the Apache Kid remained at large and was suspected of various crimes. A $5,000 reward for him, dead or alive, was promised by the Arizona territorial legislature but the Apache Kid was never found.

Memorial Of The Legislative Assembly Of Dakota Territory, …
JOHN A BURBANK

Letter From The Secretary Of The Interior, In …
JAMES HARLAN