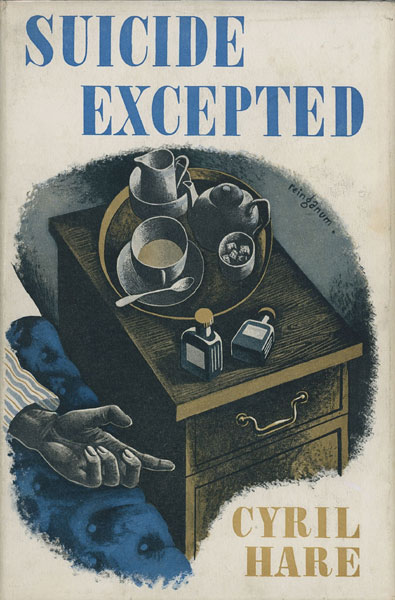 First edition. Pseudonym of Alfred Alexander Gordon Clark. Author's third book. Original black cloth with titles stamped in gold gilt on the spine. A lovely fine, clean and square copy in the near fine, lightly rubbed and with a few tiny nicks bright, pictorial dust jacket. An exceptional example and rare in the dust jacket. Published in the U. S. in 1954 using the title "Murder Revisited." Three amateur detectives try to change a suicide verdict to murder. Inspector Mallett lends a hand and reveals a completely unexpected solution to all. Alfred Alexander Gordon Clark (1900-1958) was called to the bar in 1924, as he joined the chambers of famed lawyer Ronald Oliver and practiced in the civil and criminal courts in and around London. "He married in 1933 and went to live in Cyril Mansions, Battersea. At this time he was employed in Hare Court, Temple. This lucky combination of names -- combined with a far from adequate income -- soon suggested a possible literary pseudonym." -- Charles Shibuk. "Eleven years after his death Clark remains one of the best British writers of detective stories." -- Charles Shibuk.

The Case Of The Stuttering Bishop.
by Erle Stanley. Gardner