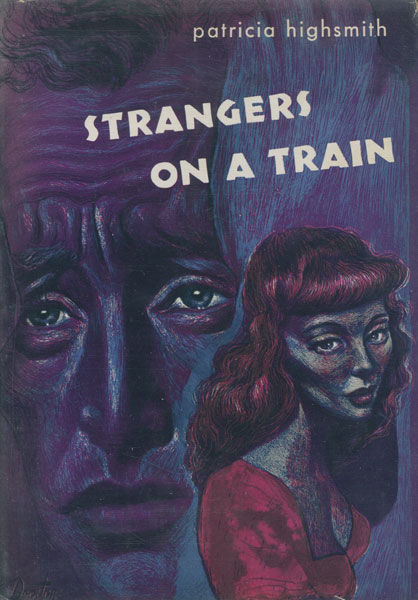 Strangers On A Train.

First edition of her first and best known novel. The author is (rightly) regarded as one of the greatest of all noir authors. This, Highsmith's first novel, published when she was 29, served as the basis for the excellent 1951 Warner Brothers film directed by Alfred Hitchcock with a screenplay by Raymond Chandler, Czenzi Ormonde and Whitfield Cook; it starred Robert Walker, Ruth Roman, and Farley Granger. Inscribed by the author on the title page: "For Clive Hirschhorn / With friendly good wishes / Patricia Highsmith / 31 Oct 1987 / London." Laid-in is a typed letter signed from Hirschhorn to Highsmith on Sunday Express letterhead where he requests that she sign his copy of her book, asks not to date her inscription to him, and asks if they might meet for lunch. Her inked reply is at the bottom of his letter and signed as "Pat." Hirschhorn held an epic tenure as theater critic for the British "Sunday Express," and is the author of several books. He is considered the pre-eminent scholar on the Hollywood musical and wrote the definitive book on the subject. Near fine in dust jacket with less than the usual fading to the spine panel and with a few tiny nicks to the extremities. The front and rear covers are bright and unfaded. In her first novel, Highsmith revels in eliciting the unsettling psychological forces that lurk beneath the surface of everyday life. Two men meet quite casually on the Washington-to-New York train, Guy Haines, a tennis star, and Bruno Anthony, who makes an offer to exchange murders. Bruno Anthony, will kill Guy Haines' estranged wife if Guy will kill Bruno's hated father. Guy doesn't take Bruno seriously until his wife, Miriam, is found murdered in an amusement park. Guy becomes the chief suspect, which threatens his tennis career; his romantic involvement with a U.S. senator's daughter, Anne Morton; his hopes for a political career; and even his life. When Bruno realizes that Guy isn't going to kill his father, he tells Guy that he intends to establish Guy's guilt by planting his monogrammed cigarette lighter at the scene of Miriam's murder. With Anne's help, Guy attempts to stop Bruno after rushing through an important tennis match and racing to the amusement park. Filmed in 1951 and directed by Alfred Hitchcock, the movie starred Farley Granger as Guy Haines, Robert Walker as Bruno Anthony, Ruth Roman as Anne Morton, Kasey Rogers as Miriam Haines, and many others. An exceptional copy of a difficult title which is rare signed or inscribed as the author rarely signed copies of her books. Attractively housed in a cloth clamshell case with titles stamped in gold gilt on leather labels on the front cover and spine.

The Moonstone
by Wilkie Collins

In The Wolf's Mouth
by Adam Foulds