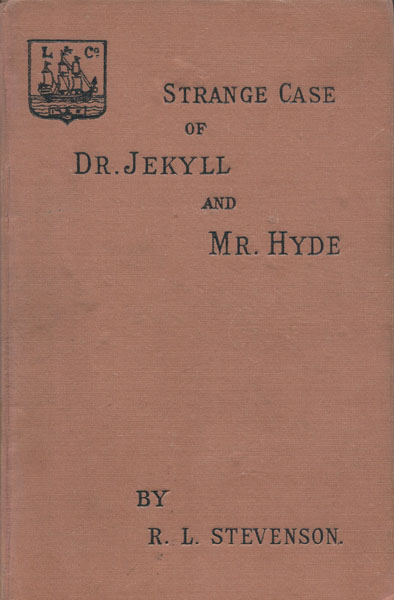 Preceded by the U.S. edition published four days earlier in the same year. A fine, bright, square copy of a book that seldom appears on the market. A classic of English literature and one of the greatest of all masterpieces of psychological and moral horror. The good doctor makes out his mysterious will advising his lawyer that in the event of his death all his possessions should pass into the hands of his "friend and benefactor Edward Hyde." Clute and Nicholls eds., THE ENCYCLOPEDIA OF SCIENCE FICTION, page 1165 say, ".... a Faustian moral fable which takes the form of a tale of mystery and horror. It precedes Oscar Wilde's THE PICTURE OF DORIAN GRAY (1891), which in some respects resembles it, by five years, and is the prototype of all stories of multiple personality, transformation and possession; in some respects it is also a tale of drug dependency." Housed in a green quarter leather and cloth clamshell case with raised bands on the spine and titles stamped in gold gilt. A Haycraft/Queen Cornerstone mystery. An exceptional copy.

The Northerners.
Bill And Martin H. Greenberg Pronzini [Edited By]

A New Introduction To Bibliography.
by Philip. Gaskill

The Secret Of Sea-Dream House.
by Albert Payson. Terhune

Murder Of A Mistress.
by Henry. Kuttner