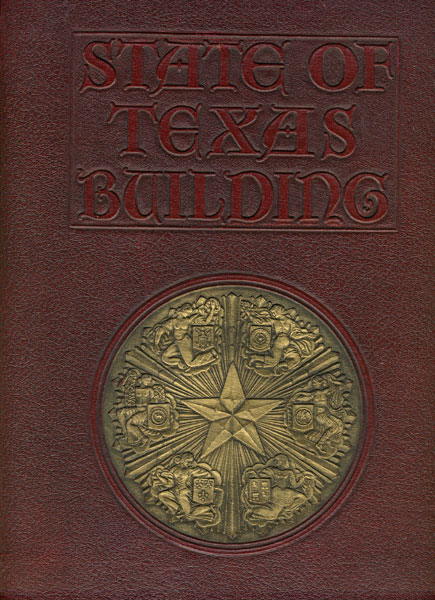 Presented by Commission of Control for Texas Centennial Celebrations and the State Board of Control. First edition. 12 1/8" x 9 1/4 in burgundy leather boards with title embossed on front cover i burgundy as well as the Great Medallion of Texas by Joseph E. Renier, printed in gold. 48 pp, contents, illustrations. The Texas Centennial Exposition, June 6 – November 29, 1936, at Fair Park in Dallas, Texas, was a celebration of the 100th anniversary of Texas's independence from Mexico in 1836 as well as a celebration of Texas and Western culture. More than 50 buildings were constructed for the exposition, and many remain today as notable examples of Art Deco architecture. This book presents illustrations and information on the building's architecture; the Texas Indian bronze by Allie Tennant; the Hall of Heroes which contains info on Stephen Austin, Sam Huston, Marabeau Lamar, Thomas Rusk, William Barrett Travis, etc; the Hall of the State with much information on the Great Medallion of the state by Renier and the murals by Eugene Savage; murals of the West Texas Room by Tom Lea; murals of the East Texas Room by Olin Travis; artwork in the North and South Texas Rooms; information on the Lecture Hall and its historical exhibits; et. al. Offers a list of the names of current senators and congressmen. Profusely illustrated and with much information. Light rubbing to spine ends and corners. Very good plus. Nicely produced item.