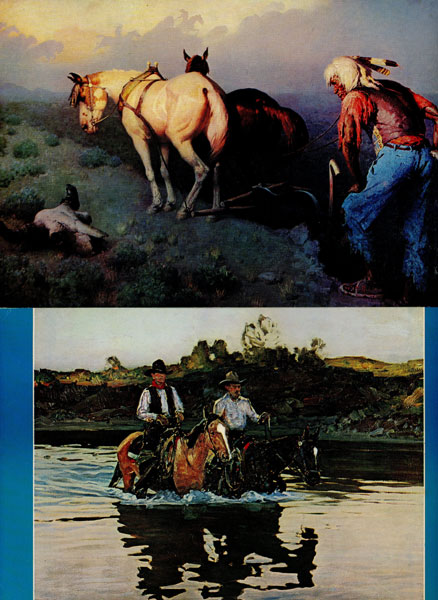 A set of six 6" x 9" color postcards of art located in the Woolaroc Museum. Art work pictured is by William R. Leigh, Frank Tenney Johnson, Frederic Remington, and Charles M. Russell. The remaining two postcards picture a herd of buffalo at Woolaroc, and the entrance to the museum. Also included is a 9" x 16" sheet printed on each side and folds to 9" x 4." The brochure includes a map to the Woolaroc Museum, along with numerous Western art, artifacts, and art objects that are housed in the museum. The name Woolaroc is a portmanteau of the words woods, lakes, and rocks that are featured in the Osage Hills of northeast Oklahoma where Woolaroc is located. The name was originally intended for the ranch house, but it soon became the name for the entire Frank Phillips ranch. Woolaroc is owned and operated by The Frank Phillips Foundation, Inc. founded in 1937 by oilman Frank Phillips and his wife Jane Phillips. In 1944, the Phillips donated all of their personal holdings of Woolaroc grounds, facilities, animals, collections, and art to the Foundation. At that time it was determined that the primary purpose of the Foundation was to assure the operation and the preservation of Woolaroc. The Foundation, a 501(c)(3), is headed by a Board of Trustees. The mission of Frank Phillips when he built Woolaroc in 1925 was to preserve the history of the West, educate, and entertain. Today, the Foundation and the employees of Woolaroc still follow that mission. --- Wikipedia. Postcards and brochure are fine and both housed in the original addressed and stamped mailing envelope which is in good condition.

Memories Of Horses And Wars, The Sculpture Of …
Don Hedgpeth [Written By]

On The Plains
by Various Authors

History Of The Sheep Industry In Arizona
by Bert Haskett