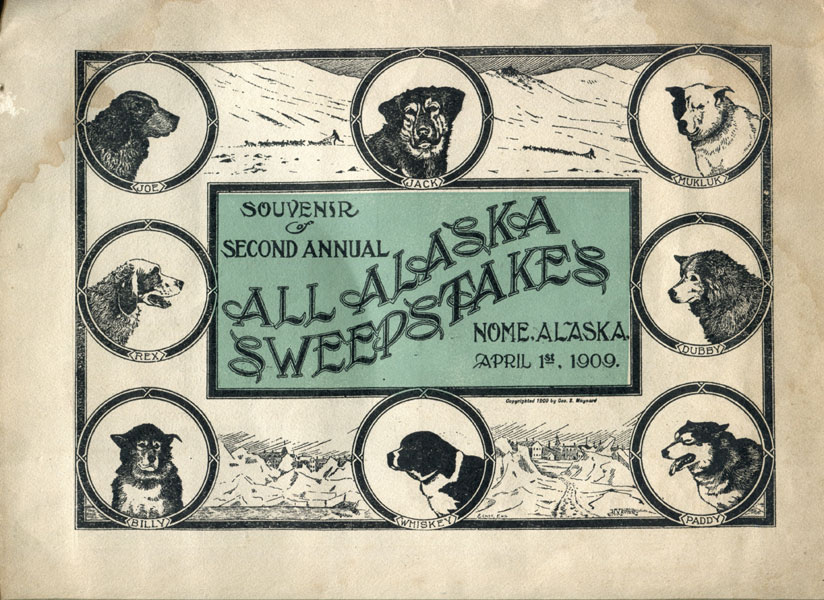 9-1/4" x 12" oblong pictorial wrapper showing illustrations of 8 dogs. 28pp. Several advertisements, some promoting the race. Black and white photographs include the large crowd at the beginning of the race with the temperature at 10 degrees below zero; the Owner, Jacob Berger, of the first two winning teams and the Drivers, A. A. Alan and Percy Blatchford; the winning trophies; the pocket watch for the Driver; the winning sled, et. al. Offers information about the eight dogs shown on the front wrapper, each's accomplishments, and their owners' names. Description of the second annual All-Alaska Sweepstakes including very detailed rules. Double page chart at center includes: the Entries and Drivers, the times it took for each of the 14 teams to run the race from point to point, total resting times, arriving and leaving times, mileages and a few notes about occurrences to some of the teams. There is a black and white photograph of each sled team and driver along with starting time, the dogs' names and the team colors. The All Alaska Sweepstakes is the oldest organized dog sled race in the world, with records kept by the Nome Kennel Club dating back to the first race in 1908. The route from Nome, on the south side of the Seward Peninsula, to the small community of Candle on the north side and return, is 408 miles, following the telegraph lines which linked camps, villages and gold mining settlements on the Peninsula. This route’s established communication lines allowed those betting on the outcome to track the race more easily from the comfort of saloons like the famed Board of Trade in Nome, where the Nome Kennel Club had been founded the previous year. "What bull-fighting is to the Spaniard, horse-racing to the Kentuckian, a Marathon to the Greek, Derby Day to the Englishman, so is the annual All-Alaska Sweepstakes Dog Race to the Alaskan." Light to moderate soiling to wrappers and a few pages, center pages have been disbound from staples, 2" split to toe of spine, along with light wear to the extremities and page edges (from use). A very interesting and informative piece of history that continues to run today.

Six Months In The Gold Mines: From A …
by E. Gould Buffum