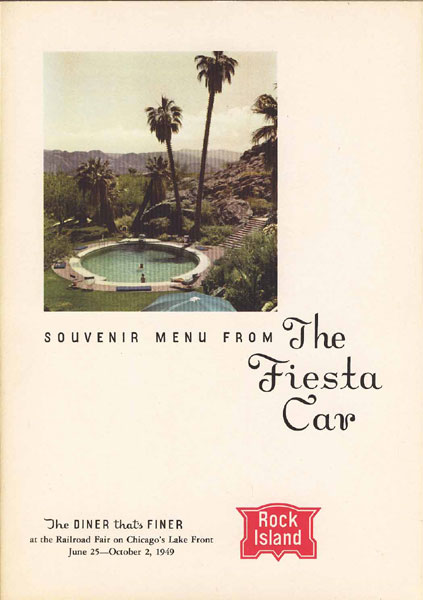 First edition. 8vo. 10" x 7" color, stiff wrappers, 4 pp. (including covers). The Fiesta Car was part of the Rock Island's service between Chicago, Arizona and California, and was the finest postwar service available on their line. The Fiesta Car provided fine meal service and this is a souvenir luncheon menu that for the price of $2.00 provided a choice of three appetizers, four entrees, four vegetables, hot southern cornbread, sliced Texas grown tomatoes with French Dressing, five desserts, and three beverages. The car was featured at the Railroad Fair on Chicago's Lake Front from June 25 until October 2, 1949, where the public was encouraged to stop by and enjoy a meal at "the Diner that's Finer." Rear cover provides a small, colored interior of the Fiesta Car along with the deluxe travel service provided from Chicago to Arizona and Los Angeles. Tiny inked number at top of rear cover, else a fine copy.

Rio Grande. Thru The Rockies - Not Around …
Denver & Rio Grande, Western Railroad

The Man They Could Not Hang. The Marvellous …
Johnson Smith & Co., Racine, Wis