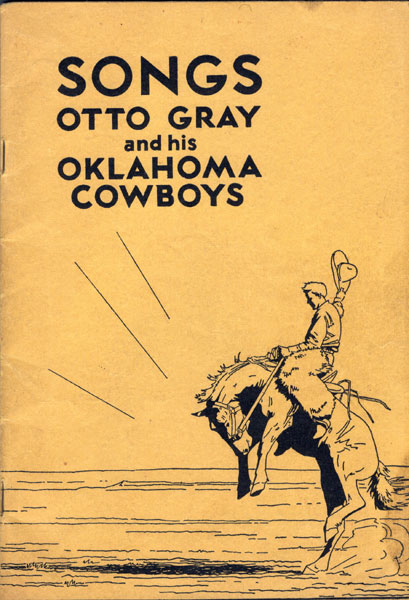 [First edition. 8vo. Pictorial wrappers. 43 [1] pp., numerous illustrations from photographs, numerous cowboy songs including words and music to "The Cowboy's Lament," "Red River Valley," " The Dying Cowboy," and many more. A little known title. Billy McGinty, a well-known cowboy, former Rough Rider, and World Championship Rider with Buffalo Bill's show, and the Oklahoma Cowboys made their singing debut on a small radio station KFRU, in Bristow, near Stillwater, Oklahoma. The year was about 1924/1925. At the same time Otto Gray, part owner of the Schultz and Gray Ranch near Wynona, took over complete charge of the band, and Billy McGinty retired to devote his entire attention to his ranch and the postmastership at Ripley, Oklahoma. There are some ranching photographs as well as photographs of the singing group included throughout the text. Not in Adam's Rampaging Herd. Lightly soiled else a very good copy.

Outlaws In The Indian Territory: The Bill Cook …
by Lonnie E Underhill

A Booklover's Guide To New York
by Cleo Le-Tan