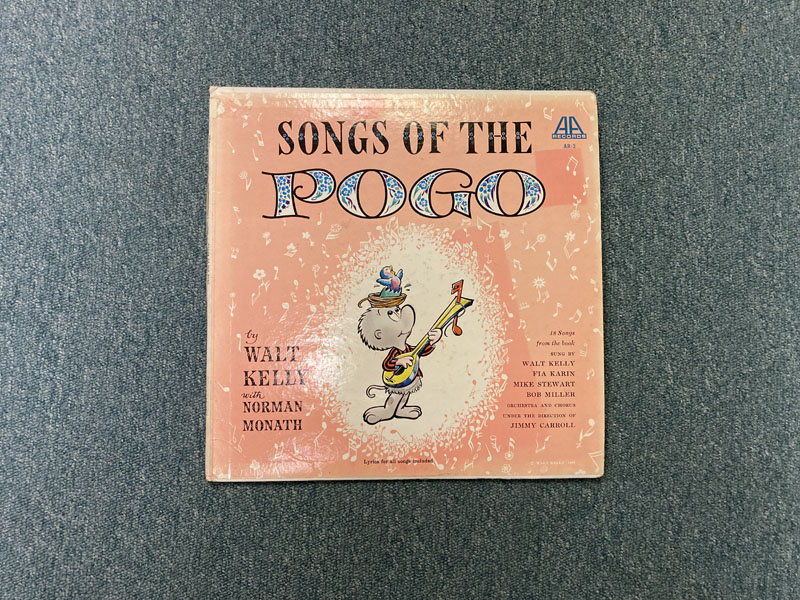 Songs Of The Pogo. 18 Songs From The Book Sung By Walt Kelly, Fia Karin, Mike Stewart, And Bob Miller.

Other works by WALT WITH NORMAN MONATH KELLY

Vinyl 12" 33-1/3 rpm monaural recording in mostly pink color-illustrated jacket with the often missing 8 pp accordion fold pink leaflet with lyrics and drawings by Kelly. This record was apparently issued with the Pocket Books distributed paperback edition of SONGS OF THE POGO at virtually the same time as the Simon & Schuster hardcover edition and its almost identical recorded version. Both versions were being rushed to distributors as late as the first week of December, 1956, in hopes of Christmas sales. This A. A. Records version seems to be much scarcer than the Simon & Schuster recording, and is valued accordingly in Thompson's WALT KELLY COLLECTOR GUIDE, where both are described and illustrated on pages 146 and 147. The record is in fine condition with no visible wear to either the black vinyl or the Kelly illustrated blue labels. In addition to the leaflet of lyrics, this recording is accompanied by a fine copy of Kelly's 1959 year-end greeting card, which he has signed as "Walt," below his 7.5" x 4.5" centerfold halftone of Pogo, Albert and all the other talking animals who inhabit Kelly's fantastic Okefenoke Swamp, with the words, "God Rest You Merry Gentlemen--Let Nothing You Dismay" in red gothic letters by Kelly. The greetings are printed in red and black on one side of an 8.5" x 11" tan paper, folded twice to form a 4.25" x 5.5" folded card with "Greetings" and a small image of Pogo on the cover. The record, is clean and unmarked in a jacket that is lightly reinforced along one edge with light wear to the corners.

The Twisted Ones.
VIN PACKER