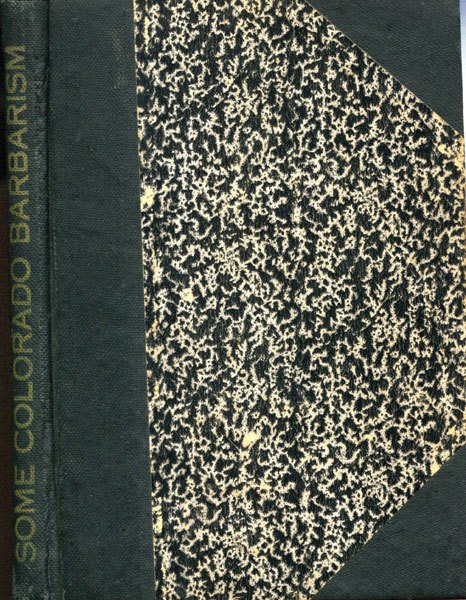 Some Colorado Barbarism. Showing An Innocent Man In A Cruel Prison. Official Tyranny In Colorado, And Denver, The Cruel City Of The West. Laying. The Foundation Of Freedom For The And Producing Class, A Proletarian Emancipator Poor

First edition. 16 mo. Original three quarter clot an marbled boards, [1], 186 [1] pp., including portrait, plus printed notice affixed to the front pastedown sheet. Occasional manuscript corrections. A strange - and rare - socio-political manifesto from a writer who introduces himself as "a Citizen of the World...your persecuted citizen," and who calls himself the enemy of the "World's Human Parasites." Harvey Gilstrap begins his work by explaining that twenty years earlier, while working in mining in Colorado, he was arrested on charges of rape. He forcefully denies the charges, asserting that he was being blackmailed by a prostitute who consented to have sex with him. Convicted, he rails against the justice system in Colorado, describes his ordeals in prison, and outlines the ways in which he has been swindled out of mining claims. But those are just one aspect of Gilstrap's text, as he also attacks the idea of woman suffrage (a strong undercurrent of misogyny runs throughout), decries the machinations of the Catholic Church and fraternal orders, argues in favor of public ownership of utilities, as well as tax and monetary reform, and heaps scorn on the capitalist system generally. Chapters include: "Prison Food," "View of Female Suffrage," "Modern Colorado Mothers," "Proposed Laws," "Kinghts Templar," "Swindles. Aspen, Cripple Creek and Church," "Jail Crimes and Cruelties," "Prison Torture," "Prison Notes and Names of Jurors," "A Law I would like to see passed in Colorado to Encourage Matrimony," "Prison Barbarism and Notes written in Prison," "Unpunished Crimes," "Sick in Prison," etc. This copy bears several instances of contemporary manuscript corrections, as are found in the Yale copy. Gilstrap, in self-imposed exile in Mexico City, had this text printed there, which partially explains the many typographic and spelling errors. A printed notice affixed to the front pastedown explains that payment for the printing was made in advance, leaving Gilstrap to accept the poor printing job. He also notes that because his text is "Anti-Papist," he may not be able to copyright it in Mexico. OCLC locates a total of six copies, at the Denver Public Library, Yale, New York Public Library, Montana State University, Wisconsin Historical Society, and the Pikes Peak Library District. Not in Suvak's bibliography of prison memoirs, though there is plenty here on Gilstrap's prison experiences. Near fine copy and rare.

Miles And Miles Of Texas. 100 Years Of …
by Carol With Roger Allen Polson Dawson