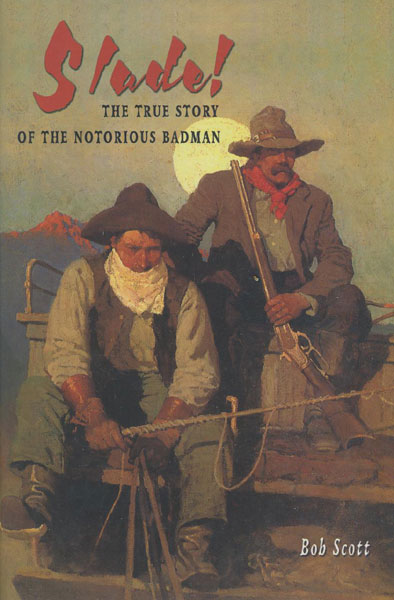 Slade! The True Story Of The Notorious Badman.

First edition. 8vo. Limited to 238 hardcover copies, signed by the author and numbered. Brown cloth, titles stamped in gold gilt on the spine, 222 pp., foreword, preface, illustrated, epilogue, bibliography, index. Foreword by Chip Carlson. This Jekyll/Hyde personality was a good friend and a deadly enemy. The dust jacket blurb describes him best, "Who was Jack Slade? A valued and efficient Overland stage superintendent, yet he cut off the ears of one man he killed and carried them in his pocket. A good husband, neighbor, and friend, when sober, who kept the Pony Express running, yet when drunk, he was a ruthless killer. A hero who bought supplies to starving citizens in Virginia City, Montana, yet he was lynched by vigilantes for shooting up the town. An eccentric even in death, his wife preserved his corpse in a whisky-filled coffin for months." In 1953 a movie titled JACK SLADE was directed by Harold D. Schuster, and starred Mark Stevens as Jack Slade, with Dorothy Malone, Barton MacLane, Lee Van Cleef, and others. Apparently the publisher was unaware of the movie and stated the following in a dust jacket blurb, "One wonders why such a colorful Old West character was overlooked by Hollywood film and myth makers. Perhaps Jack Slade was too bad, too complicated, too good, or too flawed?" As new, unread copy in dust jacket.

Sights In The Gold Region, And Scenes By …
THEODORE T. JOHNSON

A Church For Helldorado. The 1882 Tombstone Diary …
S. J. REIDHEAD

Lawlessness In Arizona. Message From The President Of …
ARTHUR, CHESTER A. [PRESIDENT]