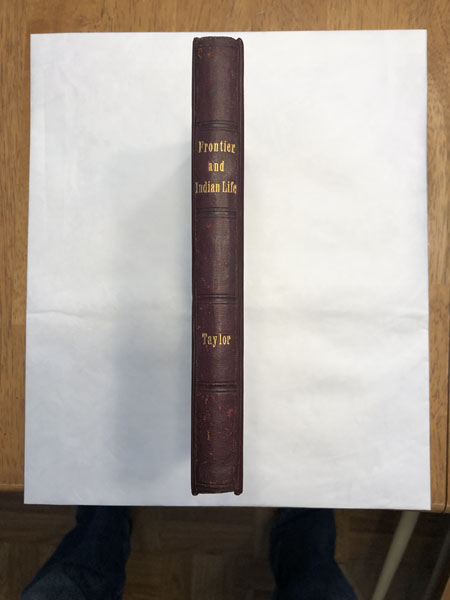 Sketches Of Frontier And Indian Life On The Upper Missouri And Great Plains Embracing The Author's Personal Recollections...

Publication: Printed and Published by the Author, 1889, Pottstown, PA

First Edition. Original three-quarter calf, with marbled boards. 200pp. Frontis portrait. Illustrations. Although Graff 4089 indicates listing of 12 illustrations, our copy lists 21 illustrations, as does most bibliographies. Graff and Howes both note that the illustrations in the volume don't specifically follow the order as listed, and also lists illustrations that are not present, while including illustrations that are not listed. Of significant Western reminiscences and narratives, in this original edition this is one of the most difficult to find. It was set-up and printed by the author, on a little rotary hand-press he had erected in the back of the Hartranft Mansion in Pottstown, Pennsylvania. He was able to print a small, but unrecorded quantity, which was quickly exhausted. A second edition did not appear until 7 years later, in Washburn, North Dakota. The sub-title states:" the Author's Personal Recollections of Noted Frontier Characters, and Some Observations of Wild Indian Life during a Twenty-Five Years' Residence in the Two Dakotas and other Territories, Between the Years 1864 and 1889." Taylor's preface states:"The material for this work was gleaned from observations made during an Overland Trip across the Plains in 1864-5; a term Soldiering on the Border; a Journal to Fort Randall, and up the Dakota River; a residence in Wyoming and Montana, and a continuous life in the Dakotas and Northwest till 1889." "contains interesting sidelights on several of the participants--Charley Reynolds, Mark Kellogg, Bloody Knife, Gall..."-Luther, Custer High Spots. Flake Supplement 8851b: "Tells of the Mormons around Omaha after being expelled from Illinois and before leaving for Deseret." Rebacked with the original leather spine laid-down, with title and author in bright gilt. 1/4" missing from top and bottom extremities of spine. Light wear to edges of decorative boards. Previous owners inscription on front free endpaper.Text block clean and tight. An exceptionally nice copy of this rare and crudely printed and bound work.

Grand Canyon, An Anthology
Bruce Babbitt [A Selection Of Outstanding Writings Compiled By]