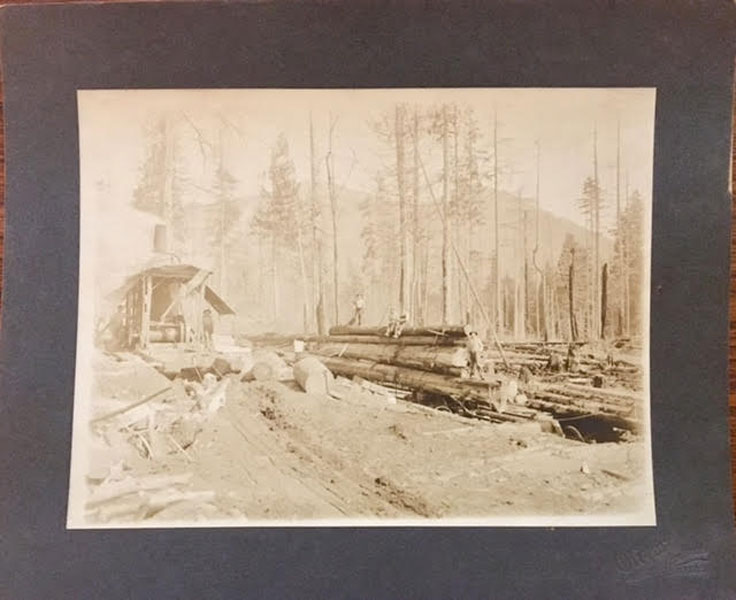 Six remarkable black and white original photographs taken by photographer Samuel O. Oliver, and depicting logging operations on the Olympic Peninsula at the beginning of the 20th century. The photographs are sized 6 1/2" x 8 1/2" and mounted on 9" x 11" gray studio boards, all embossed at lower right corner with photographer’s stamp, and all with dittoed typescript captions tipped in on versos. Photograph No. 1. Hauling logs over skid-road and loading to cars with “Gipsy” drum. 10 x 12 twin cylinder road engine; Photograph No. 2. Yarding logs to track and loading with loading drum. Yarding engine. 10 x 13 Willamette Humbolt Compound Geared twin cylinder engine; Photograph No. 3.. A Washington tooth pic on the landing, ready to load. . . 28 ft. long, and 86 inches in diameter. . . ; Photograph No. 4. The “tooth-pick” loaded, and ready to start on the second leg of its journey toward some ones “happy home;” Photograph No. 5. Log dump, boom, and holding grounds. . . ; Photograph No. 6. Cookhouse No. 4. Part of the Crew. Ready for the Gong. This extraordinary group of photographs chronicling the logging operations of the Izett Lumber Co. in Brinnon, Washington, which had begun building a logging railroad between their timber cutting and mill operations after 1903, which is now part of Dosewallips State Park. The extensive captions detail the newly introduced High-Lead yarding, or “Flying” yarding which was a tremendous improvement upon previous groundlead yarding, by combining a system of overhead cables and blocks rigged a steam donkey yarding engine allowing for faster pace logging, and opened up previously inaccessible tracts. These photos show the Izett Lumber Co. yarding and loading Washington Red Cedar intended to be used in cedar shake mills, as well as Douglas Fir and Western Hemlock. The extensive captions detail the rolls of the Hook Tender, Rigging Slinger, Choker Man, Sniper, Line Chaser, Sled Tender, and others. Two of the photos focus on a large Old Growth “Washington Tooth-Pick” which was a 28 foot long Douglas Fir log, 86 inches in diameter at the small end, and containing 10,120 feet of milled lumber. The log is shown being loaded onto a railroad car behind a Izett Lumber Co. Shay locomotive, followed by subsequent photo of the locomotive delivering the “Tooth-Pick” along with other logs to the mill on the Dosewallips River by the Steamboat Landing. Izett operated a 6-mile logging railroad to fuel his operations and sawmill in Brinnon, which continued to operate for a couple years after his death in 1913 before being sold to a group of Seattle businessmen which later became Fiberboard Products, Inc. based in Port Angeles. Samuel Oliver began working as a photographer in Seattle, Washington, after 1900 for Otto Goetze of Fort Wrangell, Alaska, who operated a studio at 1406 4th Ave. until 1910 when it was advertised for sale. Oliver appears to have purchased the studio and equipment, first operating at the 4th Ave. location at the corner of Pike for a couple years, and then for Charles I. Knaggs’ amusement parlor in Tacoma, and later operating a studio at 1817 Hewitt Ave. in Everett, Washington, prior to his death. Samuel Oliver Seattle Studio photographs are quite scarce. Minor edgewear, couple minor tears to mounted dittoed sheets on versos, 1 image with very minor nicks at lower fore-edge, 2 with light overexposure. A very good group of images, with the majority retaining bright strong contrast.

Robber And Hero, The Story Of The Raid …
by George. Huntington

"Souvenir" Peck's Bad Boy And His Pa And …
by George W. Peck

Pioneers Of The Black Hills Or, Gordon's Stockade …
by David. Aken