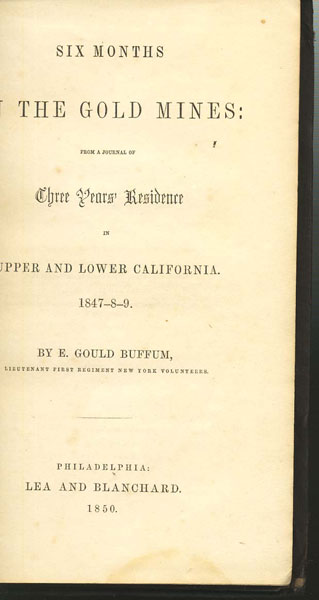 Six Months In The Gold Mines: From A Journal Of Three Years' Residence In Upper And Lower California, 1847-8-9

Other works by E. GOULD BUFFUM

First edition. 12mo. Original decorated, black cloth. x-xxiv, 3-172 pp. + 38 pp. of advertisements. Introduction. The author of this important and fascinating work, as Lieutenant in the 1st Regiment of New York Volunteers, left New York in September, 1846 bound for California on board the Thomas H. Perkins, arriving in the San Francisco harbor in March, 1847. His military duties transferred him to La Paz, Monterey, and Pueblo de Los Angelos, the latter from which he was discharged on September 18, 1848. Immediately departing for San Francisco, he arrived on October 18 and left for the placers and the quest for gold in October 25, 1848. The author's introduction best describes his subsequent narrative: "A narrative of my journey to, and life and adventures in, the golden region of California, during the autumn, winter, and spring of 1848-9, with a full and complete description of the principal placers, the process of extracting gold from the earth, and the necessary machines and implements; a theory of the origin of the Golden Sands; an account of the gold-bearing quartz of the Sierra Nevada; a history of the rise and progress of the principal new towns and cities; the formation of the State Government, and a six months' residence on the Gulf of lower California...a truthful narrative, and statistics upon which reliance may be placed...a resident within her borders for nearly three years, conversant with the language, manners, and customs of her inhabitants, an observer of her wonderful growth, and a gold-digger for six months...." An excellent narrative by an articulate observer and participant. "Authoritative source on the early period of the gold discoveries by a resident of California at the time."--Wright Howes. Graff 472: "One of the chiefest sources of authority for the history of that period."--Cowan. "One of the most important contributions to the history of California."--Bancroft (Cal. VI, p.98). Wheat 28 says "The author came to California with Stevenson's Regiment of New York Volunteers. His book is one of the earliest authentic personal accounts of the California diggings." Light wear to the spine ends, a small old water stain to bottom edge of first four pages, inked name on front pastedown sheet and a few ink spots on front and rear fly leaf, text block clean with no foxing. An attractive binding in very good condition.

Purple Sage. The Exploits, Adventures, And Writings Of …
GLENN SHIRLEY