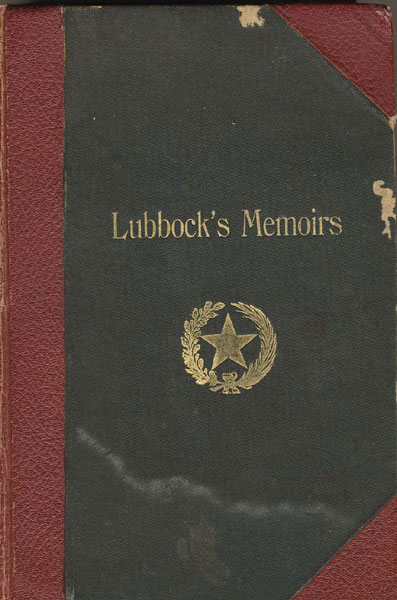 Six Decades In Texas Or Memoirs Of Francis Richard Lubbock, Governor Of Texas In War-Time, 1861-63. A Personal Experience In Business, War, And Politics

First edition. 8vo. Two-tone red leather and black cloth, titles stamped in gold gilt on front cover and spine, Texas star stamped in gold gilt on the front cover, frontispiece [portrait of Governor Lubbock], xvi, 685 pp., author's preface, editor's preface, illustrated, portraits, plates, appendix, index. Illustrated with full page engravings and etchings. Basic Texas Books 130 "Entertaining and forthright, full of humor and entirely lacking in vanity ... one of the best accounts of business life in early Texas. He resigned as Governor of Texas during the Civil War to get into the action. He became aide-de-camp to Jefferson Davis ...his recollections of the war years are the most extensive in the book. The sections relating to (his) part in the Republic of Texas are the most vivid and useful." He served 63 years in public office. Includes interesting details of early Texas merchant life in Houston. The blue and green floral patterned endpaper is present at the rear flyleaf but missing from the front fly leaf, former owner's inked name on front flyleaf, moderate wear to cloth edges, and spine panel lightly rubbed, else a good, internally clean copy of an elusive title.

The Klondike Travels Of Mattie Silks And Her …
by Jay Moynahan

A Boundless Privilege
by Oren Arnold